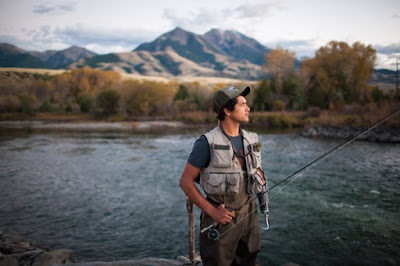 On a certain level I am of the opinion that the last thing we really need is another feel good film about a person overcoming some form of disability. How many of this god damn things are there- so many that we should all be singing Zippadee Doo Dah every day. If I could I would greatly reduce the number produced every year...

...and then there are times when you see a film like CHARGED  and you realize that some stories absolutely have to be told. Stories like this  really show what people can do if they have the right support and iron will.. Not only does CHARGED transcend the feel good genre it is operating in but it also rises to the top of the film world to become of of the best films of the year.

The film is the story of Eduardo Garcia, an avid outdoorsman and chef (Outdoors first ,cooking second) who was shocked in a freak accident as he was hiking alone in the woods when he touched the carcass of a bear he didn't know was electrified. Managing to somehow get to his feet he staggered to safety. What follows is one hell of a tale about survival, friendship and family. And before you ask- the there is a hell of a lot more to this story then just one guy getting zapped and recovering, there are complications.(I'm not saying more because you have to see this for yourself)

Outside of a warning of the occasionally graphic nature of Garcia‘s injuries there is very little I can say about the film other than just see it. Seriously this is just a great film and a great story. This film is an absolute kick in the ass as we watch the long road back. We see the injuries, the restoration and the family and friends who circle around Garcia. It’s a wonderful tale of the power of people to overcome when supported by special people.

It’s also one hell of a tale as the twists and turns keep you watching. And again as much as I want to discuss the film and where it goes I’m not going to do that because it is much more fun not to know where it goes.

I love this film. I wandered into the screening not really in the mood and not sure I wanted to see the film (I hadn't asked to see it) and ten minutes in I was hooked and leaning forward in my seat needing, not wanting, needing to know where it was going. This is just an awesome visceral tale that will make you go “wow”.

The film plays June 3 and 4 at the Greenwich International Film Festival and is highly recommended. For more information and tickets go here.
Posted by Steve Kopian at June 02, 2017