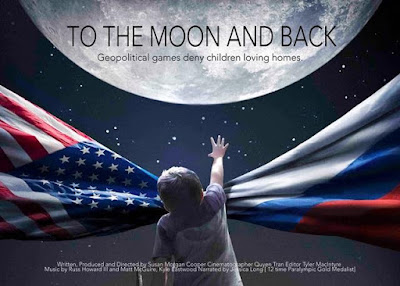 The film is the story of several couples who chose to adopted disabled children from Russia just as Putin rose to power. In a political power play Putin stopped the adoptions of Russian children by American parents citing the death of several children once they got to AMerica. Never mind that the deaths were not malicious, Putin cut the children off and damned the kids and parents into a living hell.

I'm not going to really discuss the film, I'm too broken by it. Where normally in a case like this I would let a film sit with me for a week or so before picking it up, the need to discuss the film for the Dances With Films screening makes that impossible. SImply put I don't want to get weepy again.

A good film, that highlights something that I'm guessing most of us are completely unaware of TO THE MOON AND BACK is also one of the most heartbreaking. It is a tale without hope...or at least until Putin gets out of office, which is unlikely

Recommended for anyone who wants to have there souls crushed TO THE MOON AND BACK plays June 9th at Dances With Films. For tickets and more information go here.
Posted by Steve Kopian at June 05, 2017