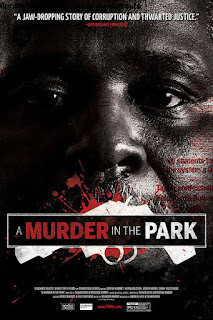 A Murder in the Park is a reinvestigation of a reinvestigation of the murders of Marilyn Green and Jerry Hillard in Chicago's Washington Park. The original person convicted of the crime, Anthony Porter ended up sentenced to death row. He was set free when a Northwestern University professor David Protess and his college students secured a confession from another man, Alstory Simon. Simon was then convicted of the crime and sent to death row.

The trouble was Simon didn’t do it and was forced to confess in order to stay out of jail for nonexistent crimes.

You will stare at the screen in utter disbelief at how Protess and his partner  subvert the legal system, not so much in the name of justice, rather in the name of money since everyone was promised money from a book/movie deal all along the way. It’s a story that will make you fear for your fellow man and make you understand why the death penalty ended up being stopped in Illinois as a result of this one case.

Old in typical documentary style of letting the people and evidence speak for itself the film doesn’t do anything flashy, it just tells the story. The flashiest thing it does is give us charts to see the connection of people.

The scariest part of the tale is that no one really seemed to look into the reexamination at any point. Protess and his flunky whipped up their version of the story that they marshalled the media onto their side and managed to get Porter out simply by showing the coerced confession of Simon. Its horrifying. More so when it was clear that any evidence being offered was obvious wrong as “witnesses” contradicted not only each other but also themselves and even the uncontested facts of the case.

This is a great film telling a great and cautionary story. It’s a must see film
Posted by Steve Kopian at June 16, 2017