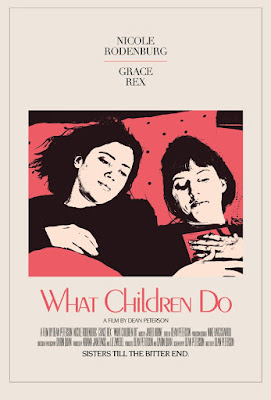 WHAT CHILDREN DO made me laugh.

I say that as a form on confession because I really hate most of the characters in this film. I think they are a vapid bunch of self-absorbed jerks that I wanted nothing from other than to get away from them.

And yet they made me laugh in painful, uncomfortable ways-which I think is the point. The behavior is not big Hollywood comedy bad behavior but small real world annoyances like rooted in not having a clue. Director Dean Peterson is clearly aware that these people are not particularly pleasant since he cites films such as WOMAN UNDER THE INFLUENCE and 10 THINGS I HATE ABOUT YOU as being influences in the making of the film.

The plot of the film has big sister Amy return from LA, nominally to help out her sister Amanda with their slowly dying and catatonic grandmother. Amy’s acting career is stalled and she is waiting for word from her MIA agent about a film role. Blowing into town with no money and more attitude then sense she bowls over everyone- doing whatever the hell she wants including trying to have drunken sex in the room where her grandmother is laying in a coma during a party. It spins out from their as the sisters crash into each other and the men circling them.

…actually what I find really troubling is that Peterson said that the film is based on personal experiences and that the two women in the film are based on his sisters. I wonder if they still talk to him.

I think what bothers me about the film is that I know people like this, and on some level I recognize the baser side of myself.

And yet I laughed. I hate comedies where I really can’t connect to or don’t like the characters but I laughed here and begrudgingly enjoyed myself. If you don’t mind uncomfortable comedy I recommend WHAT CHILDREN DO

WHAT CHILDREN DO plays at the Lower East Side Film Festival Monday June 12. For tickets and more information go here.
Posted by Steve Kopian at June 10, 2017