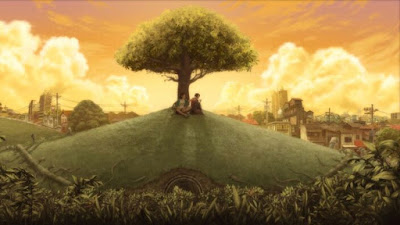 When you see SAVING SALLY - and you should- remember to stay through the end credits because there is a bit at the end.

Lovely little film about a teenage comic artist in love with Sally who is his best friend, inventor and mercenary. Sally had once saved him and they had become inseparable as a result. When Sally takes up with an slimey guy and her parents become too much, our hero sets out to save her.

Beautiful mix of animation and live action (out hero sees most people as monsters) was one of the films I absolutely had to see for the New York Asian Film Festival. I had seen the trailer and it simply blew me away.  It was the one film I wanted to see on the big screen.

90 to 95% of the film works perfectly. A wonderful love story with great characters the film feels like a comic book that or hero might draw. The performances are spot on, the emotion is dead right and the look of the film is delight for the eye.  For all intents and purposes the film is a  delight.

Taken on its own terms it is a unique film that is far removed from all the other cookie cutter films. A truly cinematic vision that is a confection that makes you feel warm and fuzzy. It's a romance that plays your heart strings the right way and makes you want to hug someone.

The problem here is that the film just misses being great and it should be...and I'm not sure why. It was a problem that was mentioned to me by another writer over dinner. He was troubled because he loved the film but didn't go over the moon the way he thought he should.(Everything is perfect except the finished film)

I don't think the film's handling of  dark subjects is to blame (abuse,rape and abortion are in the mix). Frankly I don't know why it just misses being truly great (not to worry its damn near close). Its a film that I loved all the way through but when I got to the end my thought was , "that was really good". And then I got puzzled because I loved so much of it. The only thing is that some of the scenes away from Sally are not  up to everything else.

Not that it matters because SAVING SALLY ultimately is a real delight. Its a film that will put a stupid smile on your face and make you want to go off and fall in love.

Recommended  for everyone (even kids if they will be okay with implied adult subjects)- And do go -you need to go see this in case the film disappears off your radar.

Also JB's take on the film can be found here
Posted by Steve Kopian at June 28, 2017