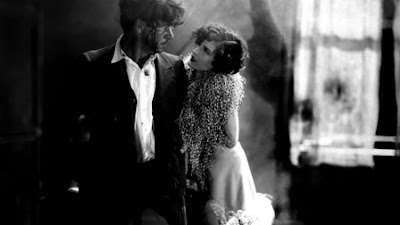 Underworld is said to be the first of the “modern” gangster films. It is the film that all the films for the next two decades copied or stole from. It’s said to have been the first film to force theaters to stay open 24 hours to meet the demand of audiences. It’s also one hell of a movie.

The film is the story of a crook named Bull Weed. A big time gangster who robs banks on his own, he’s strong enough to bend a silver dollar in half with his bare hands. He has a sweet spot for feathers, his lovely lady. He also has a soft spot for those down on life befriending a down out fellow he nick names Rolls Royce.  Bull cleans up Rolls and sets him up in his old hideout as the keeper to a secret escape route. Trouble rears its head as Feathers and Rolls begin to circle each other. They remain apart, but Bull is jealous. However Rolls and Feathers don't have much to worry about because Bull's rage ends up directed at a rival gang leader who tries to rape Feathers. Its a rage that will spiral everything to tragedy

Watching the film 90 years on for the first time it’s odd how familiar the film is. I’ve seen variations of this before because this is where it all started. The quintessential crime film it’s easy to see how the film was pillaged for decades after (the City is Yours sign here is echoed in DePalma’s Scarface with the one about the world). Not paying attention to the credits I was shocked at how much it seemed like a Ben Hecht script and I wasn’t surprised to see it came from a story he had written. Actually if you read lips you’ll see the lines of dialog spoken on screen sounds like Hecht dialog. The lines are so good I wouldn’t be surprised if they weren’t used in sound films years later.

What amazes me at how much the film doesn’t feel like a silent film. Other than the occasional shot the whole film feels as though it belongs from five or ten years later. I think the reason it stayed with audiences wasn’t because of the genre simply because it doesn’t feel old. Even today, despite some classic movie conventions, this is a film that moves and behaves like a modern film. There is a nice grayness to the characters that keep things nicely shaded.

Evelyn Brent performance as Feathers is stunning. There is a strength of character that is beyond the script. You feel the miles on her.  It as glorious bit of acting as I've ever seen.

Larry Semon is amazing in a character role. Semon, an actor director best known as a comic (and director and star of the 1925 Wizard of Oz) shines as one of Bull's henchmen. While the role most assuredly has comic elements to it it is still light years away from Semon's other films. There is a wormy sense of menace that makes you wary of him. Watching it one has to wonder whether how would have not had the break down in his health that killed if had had managed to take more roles in other people's films.

This is a great film. Its so good that when the film was done I started the DVD over again. This is not a classic of silent cinema but a classic and influential film for all cinema.

I can't recommend this film enough. This is definitely worth seeing especially i you can get the Criterion Von Sternberg DVD set which two scores for the film plus a 40 minute making of, not to mention two other films (Last Command and Docks of New York)
Posted by Steve Kopian at June 24, 2017