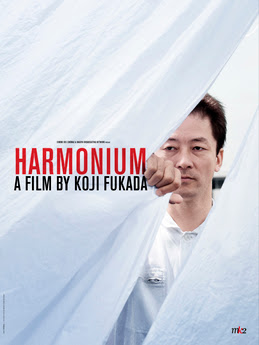 I saw this film back in February when it played Film Comment Selects and was told I was only allowed to do a capsule review. However now that the film is coming out Friday I wanted to take the time to say a little bit more.

HARMONIUM starts when a family takes in a stranger who is going to work for the husband, Things quickly begin to spiral out of control as the family dynamic changes and tragedy strikes. Several years later as the family is still trying to find answers the pattern begins to repeat...

I don't want to say too much because where this goes and how it goes will knock your legs from under you. In the time since I first saw the film I've read a  number of pieces that have said too much and discussed details that shouldn't be revealed. Its one thing to say bad things happen it's another to tell you what they are. To do so will make the emotional impact less. While a completely different story and in no way related, imagine if you knew all the details of OLD BOY, it wouldn't be as powerful. HARMONIUM works best when you have no idea whats about to happen.

I was rocked by the film. I was aware going in about the darkness but I was unprepared for what exactly happened. I am in awe of the film. It's provoked a reaction that still hangs with me four months on. In a way it's kind of like how I reacted to OLD BOY.

Do I like the film? I don't know since it's a bit bleak for my tastes but I admire it.

Definitely worth a look for those who want something meaty dark and with no answers (a great deal is left hanging)
Posted by Steve Kopian at June 11, 2017