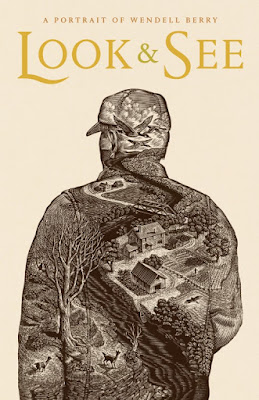 LOOK & SEE: A PORTRAIT OF WENDELL BERRY is a tough nut to sell. Far from being a bad film , it's pacing and low key way of doing things is going to cause some people to nod off. On the other hand the films magnificent marriage of words and image will delight many others, especially those who see this on the big screen.

Berry was a well known writer who in 1965 took family away from the big city to live in rural Kentucky. He found success in writing about the land and life he loved turning ot novels, stories, gardening books, poems, essays and pieces championing environmentalism. The film is full of friends and relatives speaking about the man and his work, as well as the man himself reading his words.

The opening three minutes where modern life is married to a Berry piece on society's drive to destroy to build, and build new that looks like everything else. It is as stunning a piece of cinema as I have seen in awhile (it's also a large part of the trailer). It is something that will make you sit up and take notice. From there the film gets to the farm and it all slows down. Life once more takes it's own time. It is through this slower pace that we get to know Berry and his work.

I really like LOOK & SEE. There is something about Berry's words that  impart a need to look at the world that isn't quite like anyone else's. Through Berry's words the world seems fresh and it opens up before our eyes. What we see on screen suddenly becomes vital. Its an amazing thing to experience. The trick is to be able to connect to it.

If you want a heady, beautiful film that will move your head and heart go see LOOK & SEE when it opens Friday
Posted by Steve Kopian at June 27, 2017