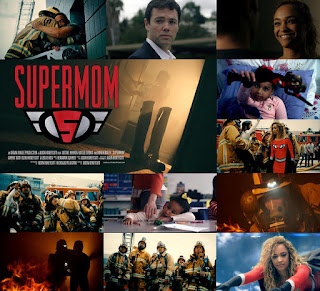 Nice little film about a little girl who thinks her mother is the superhero Skyfire.  She thinks this because she works long hours at night.

This is lovely little film about how we see our parents and how we view the first responders who keep up safe.  While I have a bunch of issues with how the film portrays firemen and women (there is no way in hell they would have just stood around looking on as one person ran into a burning building), the film still stand as a moving little film because it isn't about the details but the emotions - which it reveals quite expertly.

SUPERMOM plays June 10 at Dances With Films. For more information and tickets go here.
Posted by Steve Kopian at June 08, 2017