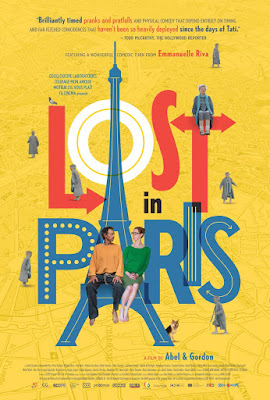 Fiona Gordon and Dominique Abel's LOST IN PARIS is the very definition of off kilter. It's also so quirky as to make normal seem quirky. Those are not statements that are meant to be negative only that this film which mixes the physical comedy of Buster Keaton with the loopiness of WC Fields is not going to play well with some audiences-which is their loss, because this is a god damn funny film

The plot of the film has tall lanky Fiona (co-director Gordon) going to Paris to help her aunt Martha (Emmanuelle Riva) who is being shunted to an old folks home.  Arriving in Paris she finds Martha missing and her things stolen by vagrant Dom (co-director Abel) who forms an attachment to Fiona. As the pair search Paris for Martha, who may or may not be dead, silly things happen.

Structured very deliberately with a knowing sense of unreality (the town that Fiona is from is a toy, people react exactly as people wouldn't in real life but would be funny in a movie) this is a film that is intent on just being funny. The film is less a real narrative then a collection of wild set pieces that form a loose story. The directors are going the silent comedy route and like Laurel and Hardy making a film where the laughs trump everything including the lack of any real plot.

For the most part the set pieces win out. In the numerous dancing sequences (the park bench one is destined to be a classic), the  loopy exchanges, and bits like the trip to the crematorium the film draws out laughs and smiles that very often make your  your face ache from the joy. There are bits here that would make the great comedians jealous had they been alive to see them. If you love silent comedy you really must see this film.

On the downside several of the sequences go on too long such as the river boat restaurant bit. And as charming as it often is, the film's quirky nature occasionally become too much to bear. The flaws aren't fatal but they keep the film from being as good as it could have been.(Then again in two weeks since I first saw it I've been talking the film up as if it's a classic so so much for my criticism)

Flaws aside this is a funny and charming film and very recommended when the film opens Friday in theaters.
Posted by Steve Kopian at June 12, 2017