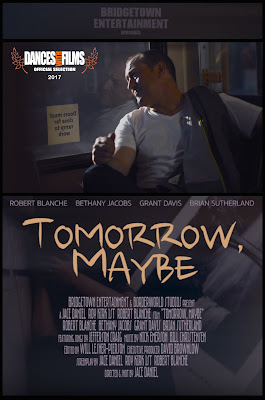 When Lloyd gets out of prison he tries to reconnect with his daughter, Iris, who he barely knows.  As father and daughter circle each other Iris's marriage hits a snag as her police officer husband begins to turn to drink and be abusive. As Lloyd tries to help his daughter things take dark turn...

That sound much more ominous than it is, since this is not a particularly tense film. There is a bit of tension in that we aren't sure how this will turn out but there is never any real fear of anything too terrible happening, the result of weak casting in many of the roles.

I should say that the problem is that any of the performances are bad, they aren't, it's just that the actors are simply wrong for the roles. The biggest problem is the two male leads.Robert Blanche is absolutely wonderful as Iris's father but there is no way he could be a long time felon. There is a certain sense that radiates from men who have been in prison for any amount of time and Blanche simply doesn't have it.  While we believe that he could protect his daughter, it has nothing to do with him being a bad ass.

The other problem is Grant Davis as Bobby. He is way too young to be a non uniformed police officer.  He also doesn't have the steel inside him that would indicate a life in law enforcement. As someone who is around police officers in my day job he simply doesn't carry himself like any law officer I have ever met over the last 20 plus years of working a regular job. If you watch the other actors playing the cops they all have a weight Davis lacks. It feels more like dress up and it collapsed the film's believability for me.

WHile not a bad movie, TOMORROW MAYBE just didn't really work for me.
Posted by Steve Kopian at June 04, 2017