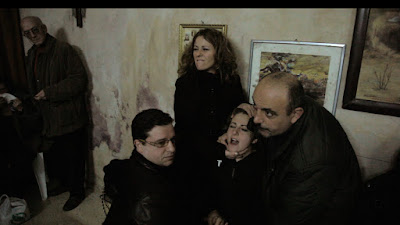 Deliver is an Italian documentary on a real life exorcist and his “patients” we follow as he in flooded with requests for help and he ministers to the people seeking solace. We also get to meet several of the people looking for help and hear about their path to coming to Father Cataldo.

Deliver is not a documentary anyone is expecting. I don’t mean that in a bad way. Rather this is a low key, fly on the wall and unsensational film that kind of makes the whole notion of possession bland. I say this as a warning, because if you’re coming into the film expecting a monster movie you are going to be incredibly disappointed. This is the dull grind of a guy who tries to help people who may or may not be possessed.

To be honest I don’t know what I think about the film. I love that it is a slice of life, but at the same time it’s so low key some of this is kinda dull. My interest wandered and there were times where I wanted to hit fast forward. On the other hand there are these of neat moments in the film such as Father Cataldo taking a call from a possessed person and getting into an argument with a demon (“ you keep saying he cheated on you but we know that’s a lie) that keep the film something you want to watch all the way to the end.

Despite my uncertainty the first time through I want to see it again. I almost have to see it again because the film was so much not what I expected that I’m not sure I gave the film a fair shake. On the other hand I have been recommending it to friends because it is so unexpected and in a way so refreshing that it demands to be seen. Definitely worth a shot.
Posted by Steve Kopian at June 02, 2017