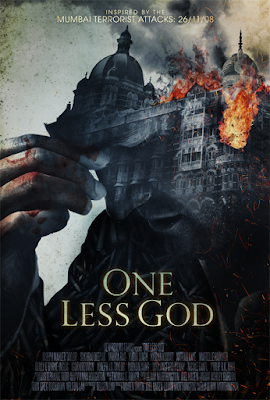 ONE LESS GOD is based on the Mumbai Taj hotel  siege. It was put together by Writer/director Lliam Worthington in in reaction to his needing to tell the story of what happened to the loved ones of friends who had been caught up n the events. Worthington crafted his film based on personal accounts and the intercepted transmissions of the terrorists.

After a glorious opening sequence set during an Indian festival over which we hear our hero talk about life, the film shifts gears and becomes much more straight forward as we find ourselves in the hotel not long before the terrorists attack. We get to know everyone, even the terrorists before all hell breaks loose.

A very personal account about what happens the film is entirely the human story of what happened. Once the siege starts we almost never leave the faces of the people involved. There are few wide shots, we are simply low to the ground like everyone trapped in the hotel.  While it brings home what it would be like to be trapped the film goes from being claustrophobic to being visually unexciting very quickly. There isn't enough establishment for us to get a sense of where we are supposed to be.

Worse there are times where this all felt cliched and a tad by the numbers. I'm not certain how close the film is to the truth but it feels like Worthington was making it easy on the audience with victims that seem to have come from the cabinet of types.

I suspect that had the opening not been such a knock out I wouldn't have been as aware of the downshifting, but the promise of something special dissipates rather quickly. It also didn't help that the killer poster (above) and the promotional material a larger scale epic than the people in hotel rooms  film we get.

Apologies for making the film sound like a disaster- it isn't, its just that there is a sense that this could have been a great film instead on just an okay one. 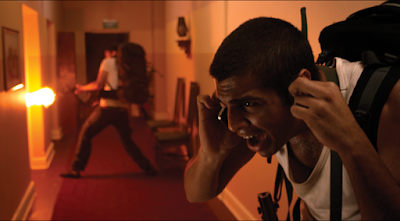