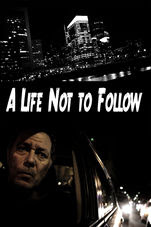 Christopher DiNunzio’s A LIFE NOT TO FOLLOW hits VOD July 4th and it’s worth your time.

Made before his excellent DELUSION, A LIFE NOT TO FOLLOW is three loosely connected stories of life on the criminal fringes of society. Characters carry over from one tale to the next. The first story is that of a mob controlled boxer who wants to get revenge on his handlers before they take him out for a transgression. The second story has a mob soldier trying to make good, but knowing he will have to kill a friend. The final story has a PI looking for a missing girl. All have a haunting quality to them

This is not a film crime film full of blazing guns, rather A LIFE… is full of lives on fire and burning out. Full of poetic losers and people who will never rise to the top everyone is painfully self-aware. They know they are going nowhere and are fully aware that their time is limited. Somehow knowing that their ends are rapidly approaching life and it pitfalls has made them talkative and we are blessed with some truly wonderful dialog and speeches about life. It’s kind of like watching three very well written film noir short stories on the big screen.

While not a perfect film, some of the secondary performances are merely adequate and DiNunzio’s script has a couple of overly flowerly turns of phrase, the film still impresses. DiNunzio knows that there is nothing more riveting than people in crisis trying to get out and he’s crafted a script that has that in spades. While his characters are losers on their way out they are not going without a fight and we are so much better for it.

The film hits VOD July 4th. For more information and to purchase go here.
Posted by Steve Kopian at June 29, 2017