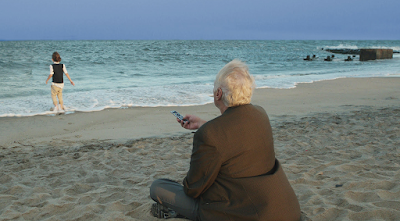 Joe Cortese gives a heartbreaking and Oscar worthy performance as Yianni a man suffering from dementia who retreats into a world of TV. While out on the street he befriends a little boy he calls Boss who shepherds him through the day.

A good character study is given heft thanks to the stunning work of Cortese who always remains real and on target with his performance. Refusing to drift into cliche, Cortese gives us a man who seems completely normal until he's not. Its a performance that is very close to several people who I have met over the years.

Essentially a day in the life this is a sad little film about a man lost in a world of his minds own making. It is a film that touches the head and the heart as it takes us across the city on Yianni and Boss's journey.

For tickets to TONIGHT AND EVERY NIGHTS screening June 3 go here.
Posted by Steve Kopian at June 02, 2017