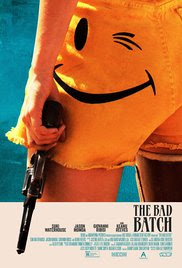 Toward the end of THE BAD BATCH the audience of critics I was with started to laugh. There was remark that was what I knew was an intentional joke occurring but I was unsure if they were laughing with the film or at it. I was curious because there were numerous "serious: moments when I heard laughter, but this was the first real joke where people were laughing. Also I knew several people had walked out of the film. I knew people left because light flooded the screen each time. In the almost 8 years of writing on film I had never seen anyone leave from this particular screening room for the reason that you couldn’t escape without everyone knowing. Critics never want to tip their hands until the reviews post unless they truly hate a film.

Anyway because there was a  sudden burst of laughter, I turned my head so I could see if it was out of delight or pity - and was shocked to discover that the normally non-reactive audience of critics had suddenly morphed into the crowd at that just seen Springtime For Hitler in THE PRODUCERS- almost everyone was wide eyed and slack jawed with a look incredulity on their faces-it seemed  no one could believe what they were seeing.

Yea BAD BATCH is that awful.

Granted some of it works on an isolated basis, but the vast majority of the film is a hysterical disaster that needs to be shipped off to Nashville for the Rifftrax Boys to riff live or shot into space so the Mystery Science crew and add it to season 12. It’s a film that confounds with it’s actual non-sense.

And it is non-sense since nothing in the film makes sense-on any level-expecially its own. There is no world building, there is no through line, and worst of all there is no internal logic. NOTHING makes any sense even in its own world.

Who put this together? Did they simply not shoot the whole script or was this a nine hour film where they cut seven of them out?

I'm going to tell you as much of the plot as I can that makes sense of:

The bad batch are people who are thrown out of Texas for various crimes. Instead of going to prison they are tossed into a desert wasteland. A woman (Arlen) is tossed into the desert. She wanders off and is captured by a large group of cannibals who tie her up, cut an arm and leg off of her and eat it. She escapes. Collapses from lack of water but is discovered by hermit (Jim Carrey) who brings her to a town called Comfort. Five months later more stuff happens involving the head of the cannibals, his young daughter and cult leader/drug dealer Keanu Reeves.

That's all you need to know... other than the ending is the new definition of WHAT THE HELL WAS THAT?

I filled pages and pages in my notebook, not of things that happened but of questions about the things that don't make sense- for example:

The film begins with dialog over the titles about the bad batch people being tattooed before being shipped off. There are sounds and talk as if there are tons of people-except only one woman is dumped in the desert. Where is everyone else?

Why does she only have half a bottle of water when she's dumped?

Where does anyone get water anyway?

How does everyone wander the desert for days without water and not be worse for wear?

When Arlen escapes the cannibals no one goes after her- why? Are free meals that plentiful?

The cannibal camp is full of people in the first couple of shots- lots of cannibals and lots of people missing arms and legs...where did they disappear to about the time Arlen escapes? Even when we return to the camp we never see anyone ever again.

Why does the shape of Arlen's stump change in each scene?

When is this set? All the technology is 1980's or 90's-people listen to LPs and cassettes but there is a graffiti listing 2012. All the on screen music is 30 years old.

Where is the electricity coming from? The batteries? the gas?

Who is Keanu Reeves character?

How can Arlen have been in Comfort for five months and not known about the nightly raves?

How could Arlen have been in Comfort for five months and when she returns after going walkabout for two days have no one know who she is?

How does Arlen shoot the black woman when the trigger is never pulled?

The Cannibal guy wants to find his daughter so bad yet he takes time to dally with Arlen?

The Cannibal Guys lives in the desert and goes riding out into it but has no idea where anything is?

How does a snow globe allow the big guy to find Comfort?

What is anyone's motivation?

Where does all the sewage go to and how do they have running water (yea I know that last part is a duplicate but it's a real question)?

Where does all the stuff in Comfort come from?

Where did they get the rocks to make a fire pit at the end?

Is this film serious or a huge joke?

There are tons more questions (that’s about a third of the ones I wrote down) but why bother?

The reason I was making so many notes is that Arlen is a non-character. We know nothing about her. We never get a sense of what she is thinking. She simply staggers through the landscape moving around  for no discernible reason.  We lock on the flaws in the plotting and elsewhere because there is a black hole in the central role sucking the life out of the film. Its so empty a role that I have to think that the role was written that way because no one can,  not even in a bad performance,be that much of a nonentity unless it's intentional.

Making everything worse are numerous god awful performances beginning with Suki Waterhouse as Arlen, who starts off okay and then goes into the toilet rather quickly. Her performance is so exceedingly bad that the only thing I can think is that she is fine but the editing wrecked it- which I can believe since there are so many editing errors your brain could explode trying to list them.

Equally bad is Keanu Reeves,who gives one of his worst performances in years. While he is hard to spot to start, once he opens his mouth you know its him since he performs his role as if a stoner is doing his role from the Bill and Ted films. The cast of non-names are anywhere from poor to okay.

There are all sorts of technical issues-Sound effects don’t match up to what is happening on screen, things appear and disappear in shots, the visual effects vary in quality, and as I said the editing is atrocious. This is not a bunch of first time filmmakers working with no budget. Seriously while highly polished, this film is more confused than most direct to video trash I see.

Watching the film I wondered not how did this get made-rather its why it was getting released. This is such a mess it potentially could damage the reputation of everyone involved. Seriously the fact that people who should know better are releasing this with a straight face is kind of offensive. Isn’t there a better version of this material? I can’t imagine there isn’t. Didn’t anyone screen this for an impartial audience? If the script was always this disastrous why did it get green lit? More importantly why did anyone sign on – couldn’t they see this was a turkey? (of course the script probably had all the explanation that isn’t on the screen in sections explaining character motivation)

When I wrote this piece originally I did so with lots of snark and brick bats but I took it most of it out. I removed all the jokes because as unintentionally funny the film is, my reaction isn’t. I’m annoyed. I’m annoyed that this is getting a release when dozens of better films aren’t. I’m annoyed that I wasted so much time with this film. Yes, I’ve gotten some laughs seeing it and writing it up but I would rather have gotten some insight and thoughtful discussion.

I can't recommend this to anyone as a straight film. For bad film lovers this is a must- especially if it’s a cinema where liquor is served and you're with a whole bunch of clever friends who talk to the screen-I'm sorry I should not have said that but then again they should not be releasing this film without warning patrons as they enter the theater that this film sucks.

For riffers only all other stay far away.
Posted by Steve Kopian at June 19, 2017

Email ThisBlogThis!Share to TwitterShare to FacebookShare to Pinterest
Labels: black comedy, mst3k material, not worth the effort, science fiction