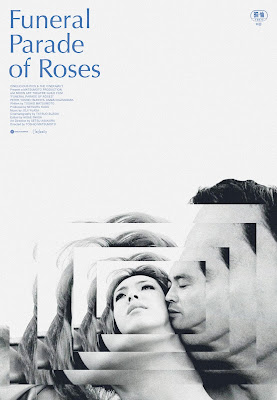 And now finally after years in the wilderness the film is being released in a 4K restoration which means that those of you who have only heard of whispered stories can finally see it while those who know nothing of it can have their world rocked.

Eddie is a transvestite hostess at one of Tokyo's clubs. He/she spends her time working, being in the films of a friend, taking drugs and trying to find love.

Said to be one of Stanley Kubrick's favorite films and a big influence on Clockwork Orange this is probably one of the best films most people have never seen.

Released in 1969 this film is still as fresh and shattering as it must have been back when it was made. Set in a "Gay" world this is actually a movie about people and how they act and feel, the fact that they are gay is irrelevant. No effort is made to have this be anything other life as live. These are real people in a real world that seems to be happening now instead of when it was made (due no doubt to the stunning black and white photography).

The film uses just about every 1960 "art film" technique you can think of and does so better than any film in from Europe ever did (Buñuel, and Bergman should have been this successful). Interviews of the cast, sudden juxtaposition of scenes, shifts in tone and style, sudden bursts of violence, all blend together to tell a story of a search for identity and place that is in its way universal, even if its outcome is not.

This is a movie that is simple to explain, but difficult to sum up. The effect of it being somewhat greater than the simplicity of the storyline.

See this movie. This is one of those movies that any movie lover should search out.
Posted by Steve Kopian at June 05, 2017