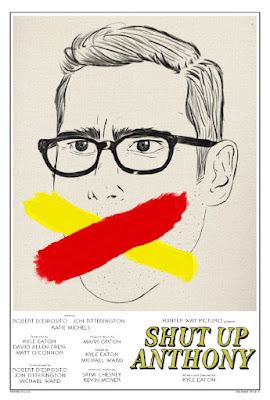 Anthony is a neurotic guy who takes way too much to heart and who talks way too much and doesn't always say the right thing. This causes him to lose his girlfriend and job in rapid succession. Retreating to his family's time share he ends up having to share it with Tim, an alcoholic childhood friend who is living in the house. As the days pass the pair bond and complications set in.

I am at sixes and sevens about this film. I really like this film for the most part. I think it's funny and charming and frequently on target. Its a film that at it's core is an inde comedy that transcends the genre. I think  writer director Kyle Eaton has made a wonderful film to the point that I want to see what his next film is...

...the problem is Robert D’Esposito as Anthony annoyed the hell out of me. I completely understand that we are supposed to be bothered by this guy but there is simply something about the way that D'Esposito plays him that never allowed me to fully warm to the guy. I kind of wanted him to shut up. While I could follow Anthony's arc and the arc of the character there is something that kept me from truly being happy at the end.

That said there is a super little film here and if you think you can get past the central performance SHUT UP ANTHONY is recommended.
Posted by Steve Kopian at June 03, 2017