Welcome to Unseen Film’s obligatory NYAFF curtain raiser. If you are a long time reader of Unseen then you’ve read a version of this before (I've done it eight times before) so feel free to jump to the recommended films below. If you’re new to NYAFF start at the top and read all the way through.

The New York Asian Film Festival starts Friday which means that I’ll be heading home to the Walter Reade Theater where my family by different mother live each July. The people who go to the fest are best people in the world and I can't think of a better bunch to hang out with for two weeks every July. It’s a glorious thing and it’s the family reunion you could want -where no one’s related and everyone gets along.

I love NYAFF. Why? Just look at all the contributors to Unseen Films and realize that a good chunk of them came from the friendships struck up at the festival. Even those who weren’t picked up at the fest still go to the fest. It’s something that’s in our blood.

What I love is that once you go to a screening or two you’re family. Once we know that you’re one of us- something revealed by seeing you at multiple screenings you’re welcome for life. People will take you home and cook you dinner. We are a friendly bunch…

And there are movies. All sorts of films from across Asia. Many films which you will see nowhere else but at NYAFF. It’s a glorious thing. The films are what brings everyone to the festival the first time, the friendships are the reason for every other trip.

This year my appearances are going to be limited to two maybe three days (assuming the LIRR doesn’t melt down for the third). Sadly I have conflicts which couple the way the programing falls on the other days makes actually getting to the fest neigh impossible….

…Not to worry we’ll be reporting on all but maybe three, possibly four films. As it stand right now I’ve seen all but 12 of the films. Basically I’ve seen 45 , have tickets to 7 and will miss 4. I’m not including the secret screening in this because since it’s secret I can’t run a review. Reviews, except those I'm seeing at the fest, will run before the films screen. There are so many that some are simply capsules but others are full on reviews.

I’ll discuss what I think of the films as a whole when the fest is over, but for now know that there is some great stuff here 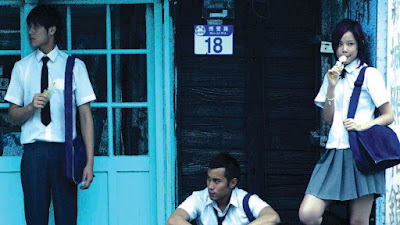 What are the must sees? I’m glad you asked because here’s my list:

Sabu's HAPPINESS is not for all audiences (no really I've already gotten into arguments about this film). The light first half hour gives way to a dark, shocking and very sad last hour. Its food for thought and a throw back to Sabu's more meditative films like DRIVE, BLESSING BELL, SATURDAY and recent MISS ZOMBIE. Its a master director making a film at the top of his game.

If you missed NOT WHAT I EXPECTED when it played NYC a couple months back you missed a killer romcom of the highest order. A must see.

ELECTION- If you've never seen the Election films here's your chance to see the first. While working best as the first half of a two part film ELECTION still rocks on it's own and will make you want to rush out and see the second part.

TAKING OF TIGER MOUNTAIN- Tsui Harks insane war film demands to be seen big and in 3D. NYAFF is giving you a chance to do both. An absolute must with a huge bowl of popcorn

TRUTH BENEATH- despite a confusing middle this korean thriller about the daughter of political candidate who goes missing has bookends that will leave you gasping.(I had a frantic email from one writer who was blown away by it)

FABRICATED CITY- Awesome action film about a gamer who is framed for murder and his race to clear himself. Not only is it an awesome thriller but its a biting attack on Korean society. One of the best films at NYAFF and one of the best action thrillers in years.

ETERNAL SUMMER- is a really good coming of age film. I saw this ages ago and I wrote it up for something when I saw it - I will repost the review when I find it

MAD WORLD- An absent father takes in his bipolar son when the hospital decides it can't do any more for him. Acting tour deforce by all involved is a trip into the world of mental illness. Go and see the legendary Eric Tsang in person when he finally comes to NYC for the screening

MRS B- haunting doc about a North Korean woman living in China who smuggles and sells people. If you want a film to make you think this is it.

Those are the musts and here are a couple more suggestions:

Miike's second MOLE SONG film is rude crude and very funny. If you liked the first film or Miike's manic style  give it a shot.

And finally a word of warning about BAMSEOM PIRATES SEOUL INFERNO. The audio of the music was intentionally not mixed or cleaned up with the result there is a lot of distortion during the musical performances. Despite playing the film at low volume on my laptop without headphones it made my ears ring and my head throb in ways that I've only experienced at the two loudest concerts I've ever attended.

Email ThisBlogThis!Share to TwitterShare to FacebookShare to Pinterest
Labels: nyaff 2017