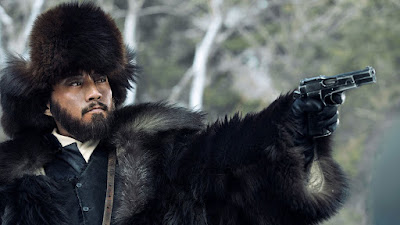 NYAFF is screening THE TAKING OF TIGER MOUNTAIN in 3D. If you've never seen seen the film, or if you've only seen the film 2D now is your chance to see something spectacular. Here is my review from when the festival first ran the film two years ago.

Tsui Hark glorious mess of a film is full of enough crazy action that you won't mind that it takes about 45 minutes before it makes sense.

The film begins on New Year's Eve in New York Chinatown as a young man pops in to see his friends before the ball drops. Seeing a Peking Opera version of the Tiger Mountain story he travels back to China to see family. We then flash back to 1946 and the story of a group of PLA soldiers who battle well armed bandits for control of a village and surrounding territory.

Based a true incident which spawned a well loved novel which spawned a Peking Opera play which gave the film it's name TAKING OF TIGER MOUNTAIN is a batshit crazy action film that simply overwhelms the senses. Tsui Hark has fashioned a crazy 3D confection that has all sorts of things exploding into your lap. As pure popcorn powered motion picture goes this film is top of the heap. The extended battle sequences are jaw dropping (one reminded me of the end of Miike's 13 ASSASSINS) and the rest of the action sequences aren't bad either (though the mid-end credit what if sequence is also mind blowing). As a ballet of wild motion this film can't be beat.

The problem with the film is it takes a good 45 minutes to get into it. The plot is so comvuluted that unless you have read the novel you won't know what the hell is going on or worse who is who. As it is some of the mid-film action gets bogged down by the uncertainty of which side are we seeing now. If director Hark didn't have a decades long reputation from throwing the plot out (the ZU MOUNTAIN films or 7 SWORDS anyone?) I would have packed up shop and gone home. Eventually it does all click and then goes like gangbusters, but for a while its really confused.

A minor problem, which depends on how you see the film is that the film was shot for 3D. Watching the Bluray at home one of my brothers wandered in and wondered why the special effects looked so weird to which I responded "this was shot for 3D". "That explains it" he said before he wandered off. The effects are heavy CGI and are full of things created to blow up or crash in the audience. I'm thinking it looks great in 3D but in 2D it looks really weak.

Still this is a kick ass film and one that is highly recommended for the action film lover.
Posted by Steve Kopian at June 27, 2017