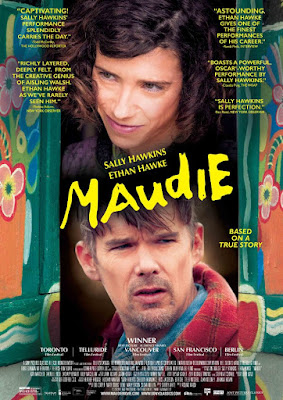 You're the only one in our family who ended up happy.-Maud's Aunt to her niece

Seeing MAUDIE was like being blindsided by a bus. Never did I expect to see such a beautiful representation of love and longing. Its a film that melted my heart and made the cranky old bastard that I am, a giant ball of mush.

Sally Hawkins plays Maud Dowley later Lewis. Crippled by arthritis she is believed to be unable to earn a living. She does however love to paint, anything and everything. When she overhears that cranky Everett Lewis (Ethan Hawke) is looking for a "maid" she walks out to his home to apply. She takes the position.Eventually they marry.  The relationship is rocky, while they love each other, he compensates for his insecurity by abusing her. Despite that they stay together. Eventually people discover her art and she begins to sell cards and paintings.

This is not a Hollywood depiction of love and longing, but a real one.  I completely understand what both Maud and Everett are feeling. The film gets all the small moments of deep love absolutely right- the looks the touches, the small moments of kindness that create a long loving relationship. Why does Maud stay with Everett, at first I think its because she isn't home. Later it's because she found a new one. Yes, he lashes out at her, but they are the moments which he regrets almost instantly, most of the time she could cut through his tough hide and reach the tenderness. We see how important they are to each other when they do separate and they get back with each other because they simply love each other too much.

It is the relationship between Maud and Everett that makes the film. Its ebb and flow was physical to me, I could feel how real it was. I could recognize it because I was there, I had been somewhere similar. I think this maybe a problem for the film at least in regard to younger audiences because until you've been around the block a couple of times you may not realize how on target this film is. You have to have lived life in love, in its less than idealized forms to understand.

Sally Hawkins deserves an Oscar and then some. Hawkins not only physically contorts her body to match the real life Maud,  but she seems to be channeling the woman herself. There is a light in her eyes that echoes the light of the real Maud (we see her in archival footage at the end.). This is one of those performances that is so good that you will not see her as anything other that Maud.  I know she has been in other films and was even up for an Oscar for BLUE JASMINE but this will now be how I, and you,see her forever.

Ethan Hawke is equally spot on. A collection of uncertain ticks and stutters, he is clearly a man uncomfortable in his own skin. His love for Maud is apparent. You see the love he has for the woman who loves him. While he will lash out both physically and emotionally, the result of a lifetime of being beaten down, we also get to see the love.  Everett has been beat down so much by life that he is uncertain about even showing a small kindness to his wife lest he look weak (or it turns bad). HE is a man who fears it will all go away and almost seems content when there are problems.

Best of all so much of the important stuff is unsaid by either Hawkins and Hawke. Its all in their eyes. or their actions. I don't think anyone says anything about love until Hawkins whispers it in the hospital at the end to crushing effect. Its a moment that broke me with its absolute power. (and when coupled with the final moments of the film I was left broken.)

Highly recommended when it opens Friday-though I suspect this will play better the older you are. 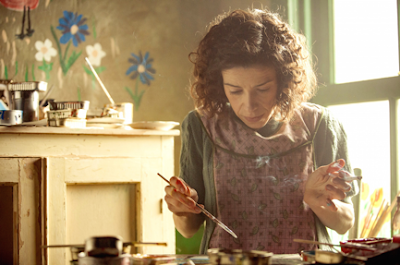