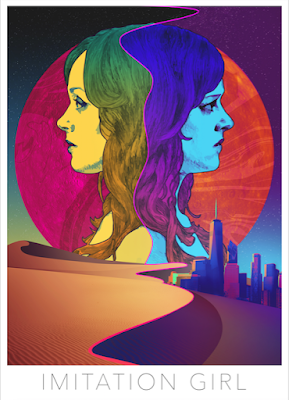 I'm going to be completely honest  at the start and say that I am the wrong person to be reviewing Natasha Kermani’s film IMITATION GIRL. Fifteen minutes into the film I knew that the film was going right over my head and that I really should have shuttled this out to someone else. My wrongness for the film aside, I can completely see that this is one killer film with its own sense of reality

The film is the the dual story of an alien who comes to earth and takes the form of the woman on the front of a magazine it comes in contact with and the  actual woman who lives in New York and has to deal with her life not being what she'd like as it spins out of control. Over the course of the films the two women come together.

Technically top notch the film looks and sounds truly amazing. The soundscape and visuals of the film create a unique head space that completely enhances the performances and the script. Several times during the film I audibly "wowed" at the beauty of the image and the finale simply kicked it to the curb in coolness.

Additionally the performances by Lauren Ashley Carter are some of the best I've seen all year. There is a wonderful modulation that keeps both her roles unique and yet similar. Its a performance that should lift her up in the eyes of anyone who see it.

And despite being able to sing the film's praises the film never connected with me. Please do not see that as something bad, it is purely something on my end. The fact that the film as a whole didn't work for me doesn't prevent me from recognizing it for what it is, a stunning piece of inde science fiction and drama on the order of things like THE MAN WHO FELL TO EARTH, which also does absolutely nothing for me but which I know is a great film.

Highly recommended for anyone looking for a heady piece of science fiction.
Posted by Steve Kopian at June 06, 2017