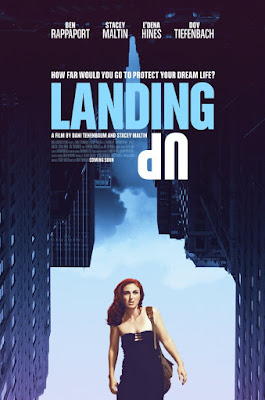 Chrissie is a young woman who mostly lives in a homeless shelter makes ends meet by scamming rich people into letting her stay with them. When she meets, David, a really nice guy, she begins to fall in love and she isn't sure if she should come clean about her life or not.

How you react to this film will depend on how you react to Chrissie played by Stacey Maltin. Chrissie is a sweet girl you see early on how her web of lies is going be problematic down the road. Watching Chrissie deal with the complications in her life is amusing at times, touching at others and occasionally heartbreaking. We like her and don't want to see her mess it all up. The all over nature of her life makes this sometimes a slightly unpleasant film to watch.

I'm not sure what I think of the film. I love that the film isn't straight forward in any way. We are forced to consider what we are seeing and how the characters are behaving. But there is a bumpiness to all, much like in Chrissie's life, that makes this a hard film  to connect to. I never really connected to what was happening on the screen.

But because I didn't connect to the film this doesn't mean I think it's a bad film. Contrary to what you think I do like this film. I like that the film forced me to work with-and kept me watching because it made me engage with it. Its a film that I want to try again down the road-away from the festival crush- which is high praise.

Definitely worth a look
Posted by Steve Kopian at June 08, 2017