in pursuit of silence opens Friday 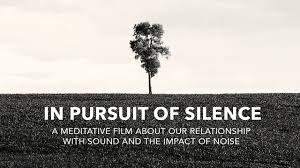 I saw IN PURSUIT OF SILENCE last year at the Dallas Film Festival and have been haunted by it ever since. This is a must see in theaters. or if you are seeing this on TV or computer put on head phones this is all about sound. It opens Friday so here is my review

This film MUST be seen in a theater. The controlled environment is required to full comprehend the aural nature of the film. It begins with 4 minutes of silence and then the sound creeps in with the ringing of a bell. The soundscape of the film is so important that the festival video link gives the instructions that the film is to be watched with headphones.

Mediation on the nature of sound and silence in particular is less a documentary and more an essay. Its a stunning trip into a particular head space. Its one that clears the mind and gets you thinking about all of the sounds and noises that intrude on our lives.

It is in its way a kind of spiritual sibling to the great documentary INTO GREAT SILENCE which is portrait of a monastery where the brothers remain mostly silence. Its a film that makes you want to go off into the silence and just think and commune with the world around you.

I don't know what to say. Its hard to really discuss or review a film such as this because ultimately the film isn't really a film, it's a journey. Its a film that takes us somewhere and shows us something and forces us to confront the world and ourselves. I can not even begin to imagine how you will react to it. Rather this is simply a film I can tell you about and press into your hands and say "See this. You must see this because it will make you think and feel." This is a film that may very well change the way you see the world and interact with it.

Of course it may not, but it is something you should see and all I cn do is point you toward the Dallas Film Festival or where ever this screening and have you try it.

It's a very recommended mediation
Posted by Steve Kopian at June 21, 2017