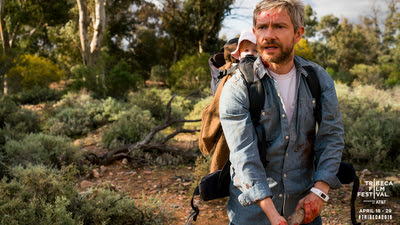 I recently spoke with actor Martin Freeman by phone during this years Tribeca Film Festival. While the talk was set up primarily for his film CARGO,  the discussion also covered his film GHOST STORIES which had opened that day.

I began by asking why had Mr Freeman had made two horror films seemingly back to back. He said that he made the films because the scripts and stories  spoke to him. They were more than just  horror films. "I don't respond to types of films, I respond to human stories."

With CARGO he said it was the father daughter story that interested him. It wasn't  really a zombie film but the story of a father's love for his daughter. He liked that it wasn't a "mundane" or typical zombie film but instead it was a family survival film.

GHOST STORIES was a film that he wanted to do because writers and directors Jeremy Dyson and Andy Nyman had asked him to do it. Also he really liked the script which allowed him to do somethings he hadn't done before.

I asked if he had seen the play that was the source of the film and he said no. This lead into a discussion of his work in the theater. He said that he loved to do theater but he could only do so much. He said that the choices he makes for the stage are made the same way that he chooses his film roles and that is with heavy consideration as to what will allow him to be a dad.Because being there for his kids is important he has had to turn down frequent offers to come to Broadway. He added that the short theatrical stints he does "help alleviate my low threshold of boredom". They are set up so he never gets bored.

I had mentioned that I had spoke the previous day with the directors of CARGO and that they had given him questions to ask.  He seemed a little wary at the prospect but went along with it.

The first question concerned mosquitoes. Freeman groaned loudly. "I hate them". he said. He said that he was so badly bitten at one location that they didn't have to use any make up for the shooting that followed.

I then asked him about what he was thinking about when he was filming the  perfume scene at the end of the film.  It was, I told him, a scene that resulted in making a room full of critics get all sniffly and misty eyed. He was delighted to hear it and said that he was going to tell the directors Ben Howling and Yolanda Ramke.

He said that he was trying to show the characters peace. It was a return to love and to his wife and daughter.

I asked him about his taste in horror films. It as a question  that seemed to stump him. " I don't look for types of films" he said. "I only look for films that connect on a human level".  Then after a moment of consideration  he said that he is the perfect age to have fallen in love with the Hammer and Amicus films of the 60's and 70's. He then added that it was the love of the Amicus horror anthologies with Dyson and Nyman who had made GHOST STORIES as a homage.

He added that he had no favorite horror film but that he loved the OMEN films growing up and thought THE BLAIR WITCH was great when he saw it.

He then added he just wanted to see great human films regardless of genre.
Posted by Steve Kopian at April 23, 2018