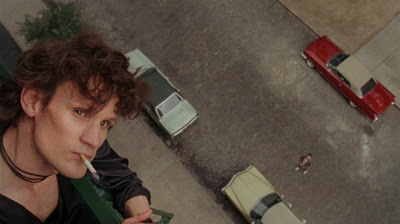 Somehow they've made a biography of  artist and provocateur Robert Mapplethorpe that renders him utterly bland. How they reduced a guy who changed the the (art) world to just  a guy is something that needs to be explored

Beginning just before Mapplethorpe met Patti Smith the film charts his course into the rt orld nd the world of photography. We watch as he tries to find his way in life and art seeing how some his many images came together.

Sadly outside of an Oscar worthy performance by Matt Smith there really isn't much exciting here. The man simply goes about creating but we really don't get any real sense of the larger picture. Last year the similar film TOM OF FINLAND played Tribeca and we not only got a sense of the man but also the place his work blazed trails in and out of the gay community. In that film we get a sense in the shift in the world that I never felt in MAPPLETHORPE despite his being someone who caused a seismic shift in the world. Without that sense there really isn't a reason to watch the film. BEing told he is great is not the same as seeing why that is so.

And as much as I a bitching about the film, it really is no where near a bad film, rather it is simply and uninteresting one.
Posted by Steve Kopian at April 29, 2018