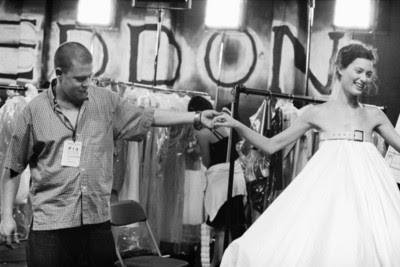 I am not certain how deep and meaningful this biography of fashion designer (Ledd) Alexander McQueen is but it is a truly visceral marriage of sound and image which makes it one of Tribeca's must sees.

What makes the film so potent is the wall to wall score by composer Michael Nyman. Nyman was one of the composers whose music McQueen ued for inspiration and it drives the entire film forward. It's rhythms are the fuel that make the film go.

The music is marries to endless images of McQueen and his work. We are there as he goes from teen with a passion to one of the most powerful and important people in Fashion. Things truly come together when we get Nyan's music to the runway shows. Things suddenly become magical and we understand why McQueen shook the pillars of heaven.

The story of a poor young lad from England who became a superstar also provides a great look into the world of fashion that if you have talent, vision and a great deal of luck and drive you can accomplish anything.

What I love about the film is that unlike most other fashion docs, and several biographies at this year's Tribeca, we are given a very clear reason as to why the film's subject, in this case McQueen matters. We come to understand on several levels why he matters. For a film like this to truly soar that simple fact has to be made clear to everyone and that is the case here. We know why he matters beyond just fashion

A glorious film, it is highly recommended.
Posted by Steve Kopian at April 30, 2018