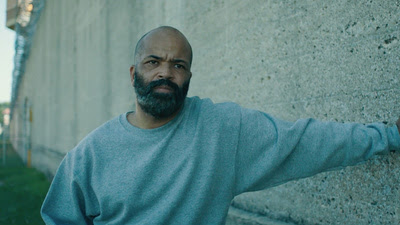 O.G. was filmed and takes place at a maximum security prison in Indiana. The story focuses on Louis, played by the always amazing Jeffrey Wright. The film focuses on the weeks leading up to Louis’ release from prison after 24 years. The film follows the day to day of the prisoners: working, playing basketball, appointments with prison staff, reading, and interactions between inmates.

The film might seem mundane to some, there isn’t a ton of drama or action, but as the director, Madeleine Sackler mentioned in the Q&A following the film, she wanted a real representation of life in prison. There are so many TV and movie based prison dramas that she didn’t feel were accurate. One very unique thing about this movie is that most of the cast are the actual inmates. Only 9 real actors appear in the film.

I thought that was amazing and so unique and while watching the film, and even after, other than the actors I was familiar with, I really had no idea who was an actor and who was a prisoner, and I think that’s what they wanted.