Tribeca 2018: Three winners and one film that made even hardened writers leave the theater 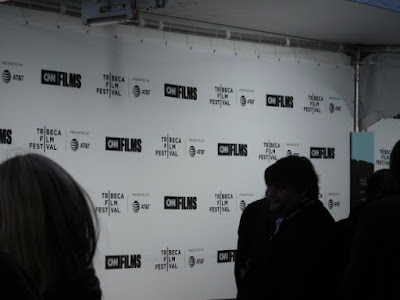 I spent the whole day solidly in the movies. I happily ended up traveling the entire day with Nora with whom I got to spend the day discussing all of the days films.

Before I give quick thoughts keep in mind I have longer reviews of  everything I've seen coming up. Because I am so backlogged coverage is going to continue for another week- I have to type over 15 reviews from the long handed drafts I did in between and on the trains. When its all said and done we'll have reviews for over 100 films and events.

The quick overview of the days Tribeca films is as follows:

CHARM CITY- with all the recent films on Baltimore and it's ills who would have thought we could use another one. A wonderful look at one of the poor neighborhoods and the people trying to make it better. Its a truly great film.

THE GREAT PRETENDER is not a great film. Its a film so awful that people I've never ever seen leave a bad movie walk out. I had lots of problems with the film from the start but it really goes off the rails when it makes a joke about a guy just diagnosed with gonorrhea bedding his girlfriend before telling her.

CROSSROADS - despite seeming to be a cliche filled story about a small school where no one knew what lacrosse a short time before going to the state championship, it is in fact a genuinely moving portrait of a bunch of people trying to improve themselves and those around them.  A hidden gem  of the festival.

IT'S A HARD TRUTH AIN'T IT concerns prisoners in a documentary class. It is also a wonderful mediation on crime, what causes it, film all sorts of other things. Why the hell hasn't this gotten more notice. One of truly great surprises of Tribeca.

And now I leave you to go see AVENGERS INFINITY WAR
Posted by Steve Kopian at April 26, 2018