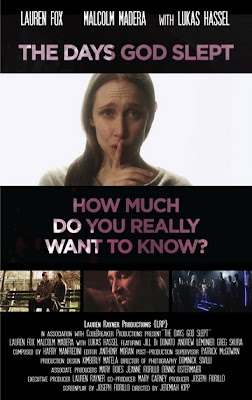 Right after I saw THE DAYS GOD SLEPT  (My review of the film can be found here) I started emailing back and forth with it's director Jeremiah Kipp about the film, the review and the possibility of an interview on the projects he's worked on (he is connected with some films I like).  I had wanted to try and do a big interview on DAYS but I didn't have a great many questions in large part because the film is best left unexplained. As Jeremiah says below he likes it when someone watching the film leans in and engages it. To ask too many questions would spoil that. I don't want to spoil anything especially when you haven't had a chance to see it.

Below are the handful of questions I came up with concerning the film- and two on the feature he just finished THE SADIST with Tom Savini which sounded intriguing. I'm hoping that this is just a teaser for a longer interview since based on my discussions with Mr Kipp there is much to talk about.

All photos are thanks to the courtesy of Mr Kipp and are his copyright. 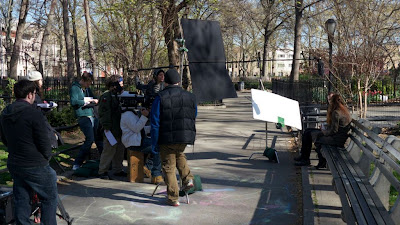 Who came up with the idea for THE DAYS GOD SLEPT and how did it come together?

The script was written by New York playwright Joe Fiorillo, whose plays are often comical tales of men, women, struggling relationships and sexual tension, often set in a supernatural landscape. This particular story, while not autobiographical, was deeply personal for him. A kind of dark night of the soul, though he sometimes claims it's an exercise in form, or in experimental storytelling. He asked me to direct, and with the invaluable help of our producer Lauren Rayner we found the money through crowd sourcing. Once the funds were secured, we assembled our cast and crew, planned our shooting schedule and built a phantasmagoric strip club from scratch. 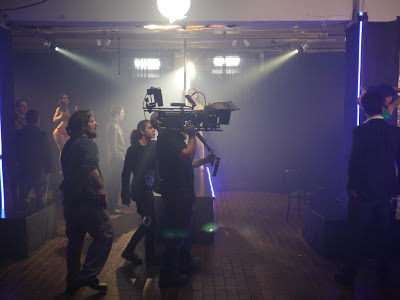 You said that you were thinking about a longer project in the same universe, can you say what you meant by that?

The collaboration was rewarding for all of us, so Joe caught the filmmaking bug. Since starting this process, he wrote another short genre film, one with a clearer narrative than THE DAYS GOD SLEPT, and we've been discussing a feature as well. The character names may change, but Joe seems to use the same Tarot deck when crafting his stories -- he's as possessed by writing about searching men and damaged women as Edgar Allan Poe was about the death of beauty, or of single-minded revenge. 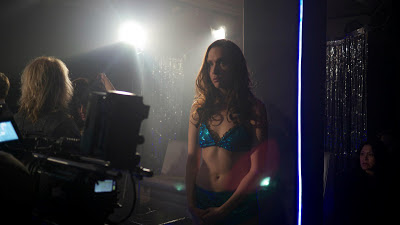 The thing that intrigues me is how you got the timing of each stop in each world right. How much tinkering did you have to do to get the switches from club to park right so it had a maximum effect?

I remember drawing a map for myself of the various levels of reality in THE DAYS GOD SLEPT, where naturalistic realism is in the park and the realm of the fantastic is in the club, with these diseased flashbacks materializing along the way. Our color palette, lens choices and shooting technique was dictated by what world we were in at the time. So certain decisions were made in pre-production that guided us through post. That map remained handy when working with our editor Anthony Moran, invaluable post-production supervisor Patrick McGowan and sound designer Roman Chimienti. We always needed to understand where we were in the story, and if we knew the path we were on, the audience would at least feel the confidence of our storytelling.

THE DAYS GOD SLEPT is an experimental film open to various levels of interpretation, and my favorite audiences are the ones who take ownership of the film, sit forward in their seats, and participate in what they think this story means. But we weren't just making an abstraction. We had clear ideas of where we were, what the characters were doing, and that's important, particularly when working on something non-narrative. We watch a Samuel Beckett play and know he was writing something specific, even if we don't know what it was; we see the specific actions the characters take, though, and provide our own meaning. That's true in movies like Kubrick's 2001, Lynch's ERASERHEAD, Claire Denis's remarkable vampire film TROUBLE EVERY DAY...and while I don't compare myself to these great filmmakers, we're playing in the same arena. 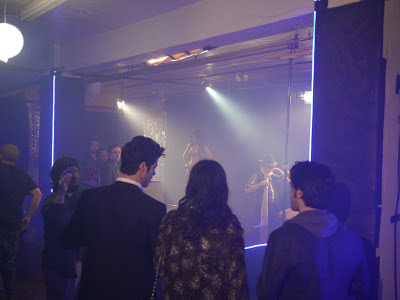 Because the film is such a kick in the ass, do you have any worries about how it might play in a festival where it will be grouped with other films? When I saw it I was largely done at that point and it colored the two films I was scheduled to preview later that night.

The way it plays in a festival is entirely up to the programmers, and I can't anticipate the audience reaction. They may feel thunderstruck by the movie, or dismissive of it. When you finish a film, it no longer belongs to you. It belongs to them. That said, I understand what you mean. I remember my friend Doug Buck had a very dark, disturbing short film that often played before Larry Fessenden's indie film classic HABIT, and both films are such a night-shriek of despair that by the time Doug's film ended they had to careen into Larry's painful world. It must have been a harrowing night! Thankfully, Larry's film is superb and carried them through. I can only hope if THE DAYS GOD SLEPT gets programmed, that it has the right traveling companions, and that our films mutually benefit one another. For filmmakers, as cutthroat as the business seems to be sometimes, we're all in it together.

After those questions I asked about the next film he had in the chute, a film called THE SADIST which stars Tom Savini.  The first question I had was-

When is THE SADIST coming out?

I have no idea. THE SADIST is a work-for-hire movie I shot in Connecticut for two very young producers back in 2010, working with much of the cast and below-the-line crew I've used on other movies. After my frequent cinematographer/editor Dominick Sivilli and I handed in our rough assembly, which is the most vulnerable time for any movie, we were promptly removed from the project and the producers chose to finish the movie themselves, including editing, score, color correction. It was painful because I have a "final cut" clause in my contract that they chose to ignore. But who wants to get into a lawsuit over a low budget independent film? I can only hope they finish the film successfully and that audiences like it, though it burns me to think of what the sound designers and composer of THE DAYS GOD SLEPT could have done with filling out the world of that movie, and what Dom could have done with the color correct. We'll never know, alas. The producers screened the film in Connecticut this January and whenever a distributor or festival programmer approaches me about it, I pass on the info of the producers and keep my fingers crossed.

THE DAYS GOD SLEPT and other short films I've made since have been an entirely different situation, based on professional respect and trust, where we were all making the same movie. It seems now like I've been enlisted to direct my second feature, once again with people I know and have worked with before to satisfying results. I'm ready to climb the higher mountains of feature filmmaking once again, and don't regret making THE SADIST. It was an amazing learning experience, and Tom Savini was a joy to collaborate with. Some folks on the convention circuit seem to think of him as aloof, but on set he has boundless enthusiasm and tremendous energy. I'd love to work with him again one of these days.

It doesn't have any connection, other than the title, to the 1960's Arch Hall film does it?


The film originally had another title, and has nothing to do with Arch Hall's cult classic. Our original title was ridiculous, but we went with it hoping we'd think of something better along the way. In the script, Tom's character was referred to as "the sadistic man" and at one point Tom said, "Why not call it THE SADIST...i.e., 'Tom Savini is THE SADIST'." And that felt right to us. I knew some genre aficionados might remember the Arch Hall movie, but there is more than one film called SAFE, more than one film called CRASH. So THE SADIST is what it was meant to be called all along...

Email ThisBlogThis!Share to TwitterShare to FacebookShare to Pinterest
Labels: interview