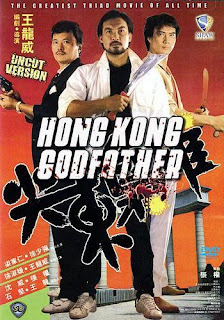 Hong Kong Godfather is the source of much laughter for those who attended the New York Asian Film festival last year. The distributor of the film in the US gave the festival a good number of DVDs to use as give a ways. Actually it wasn’t a good number it was probably the entire pressing of the film with the result that at Subway Cinema events as late as December were filled  by groans as people in the New York City area who didn’t have the DVD were gifted with copies.

Strangely I never had a copy and only relatively recently picked up a copy in Chinatown. Sitting down one night when I just wanted to chill out I put the disc in and I quickly realized that the reason the film was being given a way enmass is that it’s far from a good film. The film is actually rather dull and boring, however it is enlivened by the occasional explosion of violence, most of which is in the final half of the film. It’s the fighting that is the reason I’m writing up the film.

The plot of the film has a rival gang trying to take over the territory of Uncle Han. When he’s killed by a traitor working for the gang three of Han’s friends plot revenge, especially when the daughter of one of them is taken hostage. What happens after that is series of blood soaked battles as the three friends wade into the bad guys with meat cleavers and knives and chop up everyone and everything in their path.

No the blood isn’t realistic but the fights are strangely visceral as it’s clear what the damage being inflicted by the people on both sides is. By the end of the climactic battle everyone is covered head to toe in the red stuff. It may not be real but it is disturbing. When the film ended I was chuckling about the silliness of the fighting, but at the same time I was disturbed by the implied nastiness…and ultimately the nihilistic attitude the film takes in the final half hour. No one and nothing is safe, and I do mean no one.

Is this a good film? Not really. As I said its all about the action, the rest is dull talking. If you can rent or borrow a copy and are an action fan, the film is worth seeing, but if you want more than that there are better ways to spend your time.
Posted by Steve Kopian at May 15, 2013