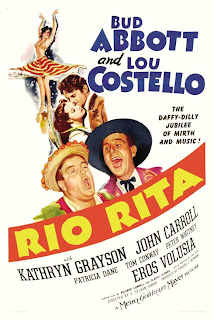 This is a kind of, sort of remake of a Wheeler and Woolsey musical from 1929 that was based on huge Ziegfeld produced Broadway musical. That version had something to do about bandits at a border town and romance and a technicolor ending. It was a film that once ran two and a half hours but then got trimmed and lost and has become a Hollywood legend.  Here we have Abbott and Costello as two guys who end up at a resort ranch and kind of tangle with Tom Conway as a Nazi spy while the owner of the ranch falls for a big singer in about 90minutes and isn't quite a legend.

Lets cut to the chase. This is a very scattershot film that is more a collection of set pieces in a rough frame work that only really kind of come together in the final twenty minutes. Its funny and the music is good but it's not a complete film. I do enjoy it but I don't love it and after seeing it again  for the first time in decades I understand why I never really remembered it.

The problem with the film is that they took the rough outline of the source material, hacked out the guts and them filled it with four things that don't go together: The Nazi spy story, which goes nowhere for most of the film, the music which is really good but seems to have been shoe horned in in a few places, the romance which is fine, but doesn't get enough coverage, and the Abbott and Costello bits, which are really good but are set pieces not connected to anything (hell the pair don't even have real characters).

Watching the film I felt adrift as if I was was watching a rough cut of a longer film. I was enjoying the bits such as the car on the lift, the 20 too scene, the game show but I kept wishing that the scenes really connected to a story, I mean why introduce the spies at the top if you're going to ignore them for over an hour?.

I like the film, hell I'm taking the time to review it, but at the same time it's a lesser Abbott and Costello film. It's worth seeing but I completely understand why it's been ignored.
Posted by Steve Kopian at May 31, 2013