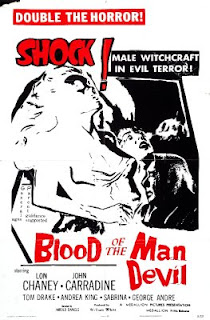 Weird battle between Satan worshiping warlock brothers in a small town makes for some offbeat entertainment.

Lon Chaney Jr (with horns)stars as the main bad guy who is trying to wrest control of the town and the family fortune from his brother, played by John Carradine. Another brother is a werewolf. Much incomprehensible strangeness ensues.

Nominally based on a novel, the film was started by one director who then was removed and replaced by schlockmiester Jerry Warren. The result is a film that continually amazes you with turns that make you constantly wonder what were they smoking when they made it. This is more a weird throw back to the films that were being churned out about ten years earlier. In reading on the film it appears that the novel was turned into a teen film but when that didn’t work the footage was then switched around and turned into a more serious (relatively speaking) horror film.

Not a good film by conventional standards this is more along the lines of so bad it’s good sort of a film. It a great deal of fun if you are either making fun of it or if you are watching it late late at night as part of some sort on insomniacs movie marathon.

The thing that amazes me is that this film seems to have remained off TV and out of the consciousness of most film lovers for years. I have no idea why it never played onTV I’m just glad this hit the collectors market so it can once more bend minds.

A must see for bad movie lovers or old film fans
Posted by Steve Kopian at May 04, 2013