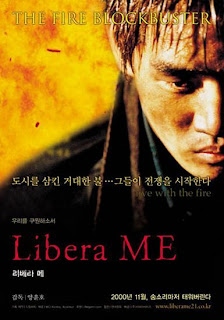 Not quite there action thriller concerns a recently paroled arsonist on a mission and the people chasing him across the city. Complicating matters is the fact our villain sets secondary blasts to trap the firemen inside his infernos.

The film initially had me sitting up taking notice when after saying good bye to our villain as he's paroled, a prison guard is blown up in a horrific explosion. The film then goes into an extended fire sequence as fire fighters try to get out of a building on fire. From that point on the film then alternates between the detectives, the fire men and the firebug in a series of wildly uneven scenes that move the plot along.

To be perfectly honest the film is very mixed affair. The film has some wonderful fire sequences and some deeply disturbing images, I'm still bothered by the kid stabbing his hand in the hospital, but the film has a rambling style with too many characters, a diffused nature and some really dopey plot twists.

I know you're probably saying to yourself that it seems that I really don't care for the film and you're probably wondering why I've taken to writing it up. Basically because the film has some well done bits, images, fire sequences ect, that are really cool. I especially like the the spectacular sequences were done before CGI ate the visual effects industry. These fire look, and I'm sure largely were real. Sure it's clear that tricks were used but many of the fire sequences don't look like a bunch of guys standing in front of green screens.

High art? Not even close. However for those who can forgive a good many flaws and deal with some spectacular sequences. Libera Me maybe worth tracking down, hell it beats most Hollywood fire films in spectacle.