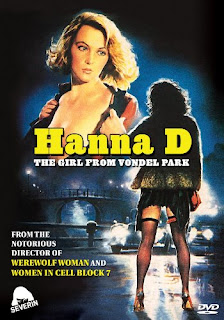 I think the only way this film could be more exploitive would be to have a rip roaring gun fight, and while that doesn't happen this is still manages to be one really sleaze exploitation film.

This is the story of Hanna. Her parents have split, her mother is a drunk with a younger boyfriend (who would much rather sleep with Hanna). Many of her friends are junkies and worse. Hanna gets money by letting people see her naked. Eventually her home life goes from dysfunctional to destructive (a short hop) and Hanna needs to escape. She begins to use heroine and eventually takes up with a guy who pimps her out. As her life begins to slide she meets a nice young man who falls in love with her and she tries to get clean. However her old life is still lurking out there.

This is a very sleazy film. Its a walk on the wild side. I have no idea if its true or not but the picture it paints isn't particularly pleasant. As an exploitation film its an okay time killer. The lead is good looking both in and out of her clothes. The gory details of the life of our heroine is suitably unpleasant. The problem is that after a while the film simply becomes very talky and repetitive. How many times will people shooting up shock? How many sex for money encounters where the girl secretly cries do we have to see before it stops effecting us? It all wears thin after a while and we become desensitized to anything by the second half (although the retrieval of the drugs in the rehab center is an exploitation classic)

If you want a sleazy exploitation film, and don't mind it repeating itself in the second half then see this movie. If you want anything else stay away.
Posted by Steve Kopian at May 20, 2013