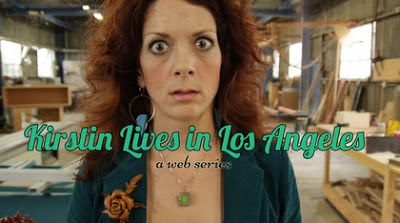 Andy Viner, the man behind the excellent Dick Night is back with an 5 part web series Kirstin Lives in Los Angeles starring Kirstin Eggers and it's damn funny.

The official synopsis says:
Kirstin Lives in Los Angeles is a five-part web series comedy about a woman hanging on to the dream of having a dream while getting caught up in the Los Angeles underworld of Kickstarter Con Artists, Twitter Prostitution and high-end furniture.

My synopsis  says the film follows Kirstin as she deals with her boss who won't pay her, her roommates/land lord who want the rent and how she turns to Kickstarter to get the rent and maybe a little more (it's not stealing it's Kickstarter). Of course just being on Kickstarter doesn't mean things will be a success...

Structured like classic comedy shorts, with the exception that each episode leads into the next, each episode starts off heading in one direction and then takes a turn to some place else. Where each episode ends up isn't where I thought it would (thank you unpredictability. What threw me was that the first episode kind of feels like a stand alone episode, but it's not, who we meet there ends up important at the end. Each episode also ends on a genuine laugh which is something you don't see in any sort of series these days..

Kirstin Eggers is great as Kirstin. I have no idea if any of this is based on her life, but she gives the character a lived in feel.  More importantly she also has  incredible comic timing that makes her reactions priceless (I mean how do you react to a naked man standing in some one's living room?)

Andy Viner proves that what he did with DICK NIGHT wasn't a fluke. He's crafted a wickedly funny, ever building series that ends both at a perfect place and so to makes you wonder okay, now what happens? Give him extra points for perfectly timing out each episode to around five minutes. Nothing feels forced nor too short, its simply perfect. I'm officially an Andy Viner fan and I can't wait to see what he's coming up with next.

You need to see this. the series can be found here.
One word of warning, the series is not safe for work.