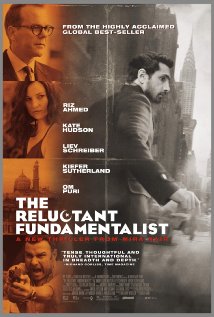 I missed every opportunity to see Mira Nair's film version of Moshin Hamid's novel at Tribeca. Illness kept me from the first press screening, a longer than expected meeting the second and all of the public screenings did not fit into my schedule. Word from my friends who saw it was good so I was bummed that I couldn't see it. However the film opened in theaters on one of the last days of the festival for a regular run so I knew I had a shot...which turned into a certainty when it showed up on the IFC in Theaters on demand service.

Riz Ahmed stars as Changez, a college professor in Pakistan. Sitting in a cafe in Lahore he tells a journalist (Liv Schreiber) his story of how he went from college student to Wall Street maven to radical.

Well acted and flashy film had me wondering why the novel (which I haven't read) was considered  such a hot property. The story of the slow radicalization of a young man who professes to love the United States should have been gangbusters, especially with the cast that is assembled here (Kiefer Sutherland, Kate Hudson, Om Puri and a large number of people who I know by sight but not name are in the cast). The trouble is that the film shows too much. By making tha images painted by words into things we see with our eyes too much is revealed.

Additionally the framing device of a kidnapping and the search for the kidnappers doesn't quite work and feels as though it was carted in from another movie. This should not be taken to say that the film is bad, it's not, its just that the film isn't great and it feels like it should be great. I suspect that had the kidnapping been removed and that Changez had simply been interviewed the film would have been much more compelling. Indeed the framing device of the novel is simply the telling of the story to a mysterious other person.

I do like the film and I do think it provides a great deal of food for thought. I suspect that had I not been trying to see the film for the last couple of weeks I would have been more receptive to it and it's charms.

Definitely worth seeing.
Posted by Steve Kopian at May 07, 2013