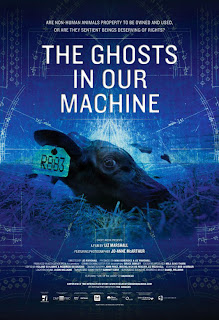 The thorny questions of animal/human relationship and ownership as well the notions of morality connected with it. Following Jo-ann McArthur a photographer who photographs the conditions in which animals in off the radar situations (Monkeys picked from the jungle going to labs, foxes in farms) and on the radar situation (dairy farms). Through her work we are asked to question whether the way we treat animals are right or wrong.

This beautiful to look at film is best seen by those who are in it's choir. The film, which takes the stand that the use of all animals is wrong short of keeping them as well loved pets is a little too strident in it's approach, even if it's low key. Give the film points for not  trying to be overtly in your face  as say something like The Animals Film from three decades back, but at the same time I can't see the film actually changing many people's minds since its a bit too much of the sort of thing with it's heart on it's sleeve. We know the film sides with the animals with all of the beautiful almost human images that fill it's 93 minutes. It's clearly screaming that animals are people too, even as it tries to insist they are not.

The problem with the film is that it tries to focus on Man's relationship with all animals  from food to products to friends with the result that the film really doesn't seem to have any answers or solutions to the questions it raises, we use animals, we treat them "badly" we have to stop... and then what? Become vegan? Don't wear fur? Don't use animals at all and use what in their place? I'm not arguing for animal cruelty only that changing the mindset to something else is fine but what do we put in it's place, especially since animals frequently are ghosts in machines we never considered?

For me the film makes it's point with in the first ten minutes and then never goes anywhere with it, it simply repeats itself .

Don't get me wrong  it IS a beautiful film, I just don't know if after 93 minutes it adds up to much if you're not already in it's camp.
Posted by Steve Kopian at May 01, 2013