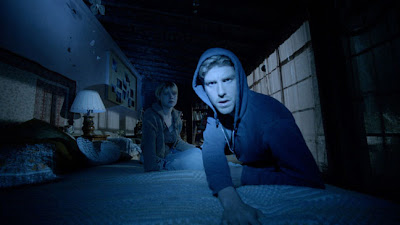 This is a repost of a review that I ran earlier as part of my Day 3 recap. I wanted to write up something more as a stand alone post but I find that what I said here sums it up best.

MR JONES is a found footage film concerning a couple who move out to the country to shoot a documentary over the course of a year. almost two months in the couple discover they are living near mythic artist known as Mr Jones. No one knows who he is, they only know his weird totems which he will occasionally send to random people. While the wife films the art in the landscape the husband flies to New York to talk to people who know of Jones's work. It soon transpires that there is something even weirder than they thought possible was going on.

This is a film that is completely derailed by the found footage nature of the telling. The problem is how the film is shot makes no sense. Much of the film is shot using a weird rig that shots the cinematographer at the same time as the subject. Why anyone would shoot a nature documentary is a question that everyone was asking after the film, even several filmmakers who were taking in the lobby after the screening. Other found footage related questions such as why do they film themselves sleeping? And why is the conceit of found footage abandoned in the final twenty minutes? They are questions that I don't have answers for and kept me from really liking the film the way I should....

...and I should have loved this film because the story is great, the performances are there, and when the film works (which it does in fits and starts) its great. Trust me had this been a straight forward film, or one that used the found footage mode sparingly this would have been one of the best films of the year. Sadly the film misses the mark.
Posted by Steve Kopian at May 02, 2013