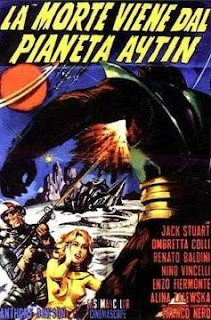 As many people have recently discovered, the ice caps are melting, what they may not know is its due to the rays of yetis from space who want to take over our world.

Yea Snow Devils is one of those weird Italian space sagas from the 1960’s. This one is from Antonio Margheriti aka Anthony Dawson and it was recently unleashed upon an unsuspecting world by the Warner Archive. I don’t know whether to smack them or kiss them, perhaps a little of both.

More a party film than something you’d want to watch straight on its own terms, this is grand Euro-space opera of the silly kind. Typical of this sort of thing is a weird mix of futuristic and present day with the space ships having what look like supped up plane controls. You have futuristic cars in the foreground and modern cars in the back. The supersonic planes are the height of 1960’s technology. The yetis seem to have traveled to earth with technology that is best described as 1930’s Frankenstein’s lab. It’s a mess.

Actually the whole film is a mess, but at the same time it has charming retro qualities to it. There is an innocence to it all that you can’t help but love.

Until the Warner release I had never run across the film and I really couldn’t understand why until I saw the film. I think the problem the film has fallen into a kind of obscurity is that the film is a kind of a tease, we’re promised yetis, we’re promised monsters and instead what we get is just furry blue people who don’t do a hell of a lot. They skulk around, briefly capture a couple of our heroes but other than that they don’t do anything. And outside of the opening moments really don’t pose a threat…except if you don’t like blue hairy people. Thinking about the film I realize I really like it, except that the villains are such a huge let down they kind of sink the film.

Still if you ignore the yetis this isn’t a bad movie, especially if you are watching it with friends and drinks and things.
Posted by Steve Kopian at May 29, 2013