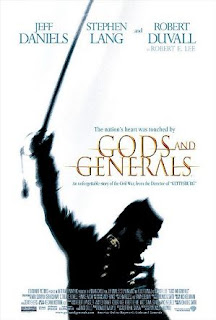 After the financial and critical success of Gettysburg, it was decided to go back and film the two novels that bookended the once standalone book. They began with the first book in the series and promptly killed any chance of the Last Full Measure ever being filmed (now that is a book that would make a great film).

Gods and Generals tells the story of the events of the civil war that leads up Gettysburg. The book includes many of the characters who are given full flower in the first film (I’ll come back to them). Unfortunately the film largely focuses Stephen Lang as Stonewall Jackson. Lang’s performance is excellent. Based on what I’ve read of Jackson Lang nails it…which is a bad thing since Jackson was more than a bit crazy and incredibly difficult to deal with. I know it could be a chore to be in the presence of Jackson but who in their right mind thought we’d actually want to spend the better part of 4 hours watching him?

Oh yea JeffreySharra who wrote the book did. I read the book and while I liked it better than the movie, I found the portions of the book with Jackson a chore to get through. I didn’t like him and I didn’t care what happened to him. Simply put Jackson was a nut job and the inability of movie audiences to connect with him is what made this film tank at the box office and drove the majority of people at the screening I attended to the exits.

Fortunately the film is available on home video and if you liked Gettysburg and have your remote ready I think you might want to try the film on DVD. What I’m suggesting is that you scan past all of the Stonewall Jackson parts and just watch everything else. I say this because Jeff Daniels reprises his role as Joshua Lawrence Chamberlain. Daniels is amazing and the scenes he are in are wonderful and show signs of what the film could have and should have been.

Actually what they should have done was filmed the last book, the Last Full Measure about the end of the war since Chamberlain is the primary focus of that book.

While Gods and Generals is largely a crappy film there are some good bits in it and if you’re willing to scan past the crap you might enjoy seeing the bits that work.
Posted by Steve Kopian at May 26, 2013