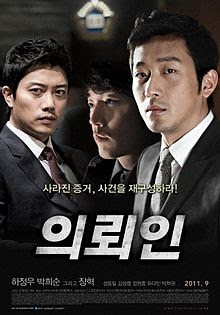 The film begins with a man arriving home to his apartment complex which is overrun with the police. He gets out of his car and nonchalantly walks into the house with a bouquet of flowers and some packages. Walking through the halls past the swarming officers he gets to his door only to find all the activity in his apartment. Walking into the bedroom he sees the bed covered in blood and the police collecting evidence. As he stares at the scene several officers come up behind him and arrest him for murder.

More a court room procedural than a straight forward mystery, this is a more or less straight forward tale where the suspect’s defense team tries to determine whether or not their client did it (there is no body and all evidence is circumstantial) and to give him an adequate defense, something the authorities don’t want to happen. A couple of things I’ve read on the film indicate that the film plays out is in its way close to the way that cases can and do play out in Korea, which for me, someone with a day job in the legal field was pretty cool.

I need to state at the start that there are no grand revelations or twists. We don’t suddenly get some grand information in the final fifteen minutes that’s completely out of left field, anything that happens is a natural progression of the story. I say this because I kept waiting for some big Hollywood gotcha moment that never came. Think something along the line of Law and Order but from the defense. It is splashy like the big budget movie, it just plays, reasonably fair with the audience.

I really like this film. Starting the film late one night I thought that I was simply going to put it on and then drift in and out of it. Instead I stopped everything I was doing and stared at the screen. I also got really annoyed when I just got into the perfect position and the first VCD ended which meant I had to get up and to switch the discs.

This is a solid little thriller. It’s a gripping tale that keeps you watching simply because you have to find out how it all comes out. As I said at the top I was hooked from the outset and really wanted to see where it was all going.

Is it perfect, no. I found that there is a point where some of the momentum wanes. Its not that there is anything wrong, its more the story has moved to a certain point and things have to play out before it picks up steam. Also in reflection I think a couple of things don’t make 100% sense. (I can’t tell you what since it will give too much away). I could be wrong since some of the bits are the result of changing perception- what I know at the end changes things at the start.

Minor reservations aside, this is a super film. It’s the sort of thing that grabs you and holds you to the very end.

Definitely worth searching out
Posted by Steve Kopian at May 10, 2013