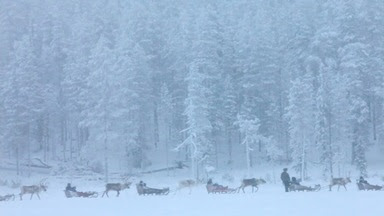 First film screened for journalists was a major let down. It's such a let down that I'm ending the bulk of my Tribeca coverage with this film (I still havea few more reviews coming but not right now). Its not the film is bad it's just that the film is so damn bland that I figure its a kind of Zen koan to dial down the excitement.

Jessica Orek's film follows a collective of reindeer herders over the course of a year. Focusing on two brothers who are in the collective we watch as they bring in the reindeer via ATV and helicopter, sort the herd, kill and gut a few, take tourists on sleigh rides, celebrate Christmas, ride snowmobiles, wander the wilderness with the family and then do it all over again. It is a film of beautiful images and few words.

And that's the problem we're dropped into things. Little is said, what is said isn't always subtitled and we are left to make of events what we will. The result is some great looking images but not a whole hell of a lot of sense...or rather a sense of wonder as to why we're seeing this? Why are we just looking at stoic faces? Why are we riding into the wilderness on a snowmobile?Why does it look like the sequence of going after the wolverine (which we never see) happens over several days but also seems like was one day broken up badly?  If I never see another fire started or coffee pot hung over a fire I'll be happy.

Why are we we being told this story this way? because no one says anything we never get to know anyone, other than the kids, at all. For all I know this could have been just a random group of people.

To be perfectly honest if I wasn't staying for a second movie I would have walked, and unlike other times when I had the urge and stayed I wouldn't have missed anything- except the multiple reindeer castrations in the final moment.

A disappointing way to have begun the festival....
Posted by Steve Kopian at May 03, 2013