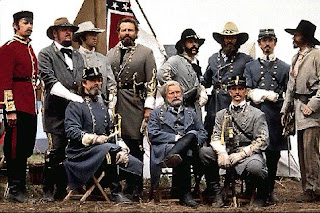 Shot as a miniseries for cable the film was released to theaters and shocked many in Hollywood with its critical reception and the fact the film actually made money when it was released to theaters, despite having over a four hour running time. No one thought that a recreation of a civil war battle with people and silly facial hair would make be a hit.

Based on Michael Shaara’s classic recounting of the pivotal battle of the American Civil War, The film focuses on various people who's lives crashed together in the Pennsylvania town over the first few days of July in 1863.

The strength of the film is not the battle scenes. They are there but they often feel rather bloodless. The strength of the film is in it's characters and in it's performances. Jeff Daniels as Joshua Lawrence Chamberlain is kind of the center of the film with his good man trying to do whats right acting as kind of moral compass for the film. His interaction with C Thomas Howell and Kevin Conway as Kilrain nicely put the human story into context. Stephen Lang is a wonderful Pickett, who's soul is crushed by the failure of the charge that bears his name, Sam Elliot's General Buford, the man who essentially picks the battlefield, may disappear after the first hour but he's a strong presence through out.

When I first saw the film back in 1993 it was in a theater packed with people. Everyone was there not because it was a war film, rather because they had heard it was a good film. There was some sort of mystique bout the film that filled the theater. Word had gotten out and people were going.

When the film came out on laser disc I picked up a copy and proceeded to watch it over and over again, as I said above, it was the characters that stayed with you.

This is one of the truly great war films, not because it is all about battles, rather because it's about people and why, sometimes we have to fight the good fight.