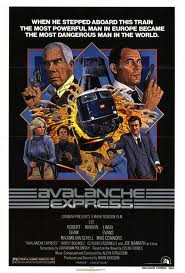 Final film of both director Mark Robson ( Monte Hellman had to be brought in to finish the film) and Robert Shaw (necessitating his whole role be dubbed over) is a very uneven affair. How much the death affected the final film is hard to say.

The plot of the film has Soviet agent Robert Shaw defecting. He's in charge of some new Soviet spy program and feels its time to go since the fact he's been feeding information to the West has been discovered. Before being flown to safety by American agent Lee Marvin Shaw comes up with a plan to wipe out the spy network of Maximilian Schell, his nemesis and the man respomsible setting assassins on his tail. The plan is to take the Avalanche Express train across Europe and let Schell's men come after them...and come after them they do in three big action set pieces.

An attempt at an old school spy thriller on the order of an Alistair McLean novel, the film is a mixed affair. The train effects by John Dykstra, who did Star Wars, are a mixed affair  that look like a model train on a table top setting during the avalanche sequence. The bad guys seem more silly than threatening, though their fire power is impressive, and the set pieces are nicely staged.

The real problem with the film is the script. I don't know what problems the film went through with the death of it's producer/director and it's star but the film frequently feels like there was supposed to have more meat to this story. There seems to to be vast amounts of back story not mentioned that should be. Don't ask me what it is I don't know, but something is missing.

I kind of can understand why the film was critially crucified when it came out. I remember reading and seeing the most awful reviews. The reviews were so bad that I stayed away from the film sincewhen it came out for that very reason. Ewcently I read some good reviews so I figured I'd give it a try.

Seeing the film I was amused. I had a good time, It's not, by any stretch of the imagination, a great film, but it is an good one. It's one of those non-taxing on you put on and just watch because you don't have to do anything with it.  I like it enough to realize I will happily watch it again on some rainy afternoon. 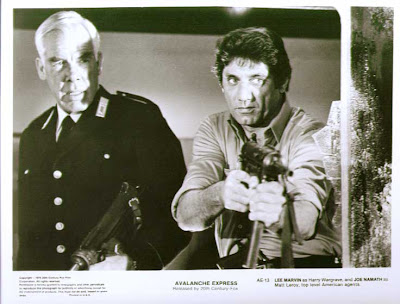