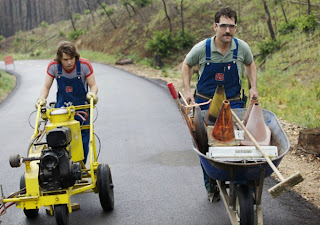 Pretentious inde mis-fire remake is the sort of road accident film that Tribeca will occasionally schedule in order to get people to ponder what drugs they were taking that day. This is not a knock against Tribeca, it's just occasionally there are films that make me wonder if there are times someone sneaks in and schedules a few films as a joke.

The film follows Alvin (Paul Rudd) and Lance (Emile Hirsch) who are repainting the roads in a section of Texas after a wild fire destroyed acres of forest in the 1980's. Alvin is dating Lance's sister Madison (whom we never see). Over the course of Lance's first week working with Alvin they get on each other's nerves have a couple of encounters with a strange truck driver, and have women problems. Its a low key brooding film with an off kilter dead pan sense of humor...

...its also a real mess. Made because the director wanted to film in a fire ravaged area, the film feels the wrong sort of made up on the spot. Sometimes that works and some times that results, as here, with a film that feels half thought out. Actually what the film feel like is a series of sequences that don't fit together (what is the whole thing with the lady in the red hat?)

The troubles with the films go deeper than than just disconnected sequences. It has cinematography that seems to have been shipped in from another film. Sometimes its bouncy hand held, sometimes its fancy and polished, other times its completely distracted as if the cinematographer wanted to be somewhere else.

Worse still is the story and characters, which allowing for the fact that the film is loose remake of a film from Iceland, seems to have been cribbed from elsewhere. Not only is the film riffing on well worn odd couple tropes you have Emile Hirsch channeling Jack Black.

On the plus side the film does have a great performance by Paul Rudd as Alvin, a man who prefers to be alone and in a relationship. He's so good I had no idea who the hell he was even though I knew who he was. The film also has some great sequences that show what the film might have been, chief amongst them being the sequence where Alvin meets the woman in the red hat in her burned out home. Its a magical sequence that promised something greater.

As it stands now the film is a misfire that is a time waster. And while I don't hate it I really don't like it either. I'd take a pass.

(By the way the title means nothing, it was something that came to the director in a dream)
Posted by Steve Kopian at May 02, 2013