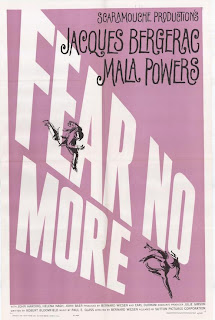 The plot of the film has a woman get on a train to deliver a package for her boss. On the train she’s menaced by a big man who appears in her compartment, finds a dead woman and is told by the police she’s crazy. That last point maybe true as our heroine has experiences, such as finding additional bodies, that later prove not to be true.

It’s a bumpy ride and for a good chunk of the film I wasn’t sure what was going on.

I’m not sure what I think of the film. Yes I sat there glued to the screen for the whole 75 minutes, but at the same time I think it was more to find out what happened rather than because I was completely enjoying myself. I think the problem is that the filmmakers bounce through the real or not twists too much early on, to the point that I wasn’t sure if it was good film making or bad. I understand they had a limited time to do what they were doing but because we’re coming in kind of mid action the feeling is similar to being a drift at sea. I felt uprooted from the moment our heroine steps on the train and it didn’t end until the credits rolled. Yes I knew what was going on but at the same time I still wasn’t sure.

I know you’re wondering if I’m not sure about the film why am I suggesting you see it.

First not only did the film hold my attention it provoke a reaction beyond liking it or disliking it. It’s a film that made me ponder it to the point I was more than just a receptor. This is a film that forces you tom think about it-whether you want to or not.

The second reason is it’s easily available as part of the 6 film Weird Noir set from Image. It is weird. It is strange and as part of a cheap 6 film set it’s worth investigating
Posted by Steve Kopian at May 19, 2013