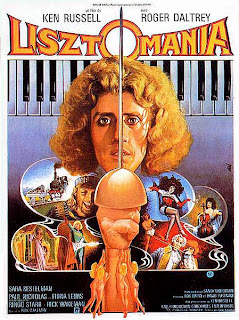 I still don't think I've ever known what to make of Ken Russell's Lisztomania. Made after Tommy Russell was given seeming free reign to make a film that likened Franz Liszt to a rock star. It was filled with huge gaudy sets, musical numbers and flights of fantasy that took things even farther from the just left of reality world the film operated in.

I've seen the film a couple of times over the years, mostly in bits and pieces on cable TV but never paid it much mind. When the Warner achieve put the film out recently I jumped at the chance to see a good widescreen copy of the film.

Seeing the film for the first time in years I was struck by several things.

First I completely understood why so many critics crucified the film. Its an endurance test at times, with much of the first half hour deadly dull as Liszt plays the piano and tries to pick up women at a concert. Its truly awful...and if you don't like the over the top insanity that is hinted at in those scenes, you're going to hate the full on madness that follows.

Second- the films flights of fantasy including the musical numbers are brilliant. As tasteless as the giant penis sequence is, it's also wonderfully weird and one can imagine something similar had Busby Berkley been allowed to do what ever he wanted.

Third there are genuinely powerful moments in the film.The war song that Daltry sings kicks serious ass even if it belongs in another film.

To be perfectly honest this film is a complete and utter mess. It only works in fits and starts and it's so off base and off color one can't help but wonder how the hell it ever escaped from a major studio. By any and all sense of wisdom the film should be considered bad... and yet....the freaking thing haunts me.

I hate this film in a lot of ways and yet I keep returning to it. I love that it challenges me to take a stand in ways that no other film does. The film kind of sort of dances around actually offending me, I mean how can a brilliant man like Russell make such a piece of crap like this (Then again he made that awful House of Usher film). How is that Russell lays all that went wrong with Germany at the feet of Wagner? It's not that simple and Russell's reading of events and history is wildly off base,more so than many fringe historians.  Yes I know the film is a fantasia on Liszt and his times but damn what was going on in Russell's head? It reminds me of his truly awful Fall of the Louse of Usher where it's a stream of consciousness series of things that no one ever checked to see if they were any good.

Watching the film on the Warner Archive disc I find I still don't know what to make of it. Its not good, its not bad, it's something that forces me to wrestle with it over and over again. It's a film that challenges me on almost every level--which, if great cinema forces us to interact with it means that it's very probably a great film.
Posted by Steve Kopian at May 30, 2013