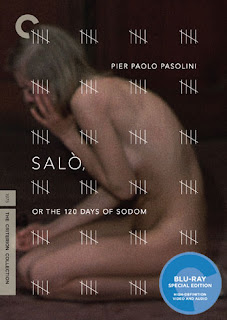 Everyone fixates on the steamed chocolate but Pasolini’s film is more than that. Yes it’s a difficult catalog of cruelty but there is something more to it. If you want to be sure of it consider that the film is still be talked about forty years on. Yes on some level the film can be compared to women in prison film, but outside of the exploitation crowd who seriously discusses those? Well yes some of us do, but they don’t cross over to a wider audience.

Pasolini’s film is based on a book by the Marquis de Sade but reset into the 120 day period toward the end of the Second World War when Mussolini was out of power and the Salo government ruled the country. It tells the story of the a group of rulers who go insane and indulge their every twisted whim until the populace revolt and kill them.

As I said at the start the film is a catalog of increasing nasty set pieces of abuse. The film is alternately boring and horrifying. I’ve seen the film any number of times and I’ve been troubled by it each time. On some level the film can be easily dismissed much like films like say the Ilsa films starring Dyane Thorne. Some of the political posturing is trite and the violence is over the top and aimed to simply shock, but at the same time Pasolini is working on a deeper level. He is making us complicit in the events on screen. We may not be taking part but we are witnessing and the longer we stay the more complicit we are. It’s as if Pasolini is trying to find out how long will we watch these terrible things. Apparently as long as he shows them to us.

He is also giving a warning that while people will, for a while kowtow to those in power this is a point where they will hit back.

I don’t particularly like the film, I don’t know if you can, and I think we should probably worry about anyone who does. It is a film I admire a great deal.

I first saw the film because I had to see if the film was a horrifying as I first heard. In a weird way I was disappointed (and to be honest, I still am). Sure there were atrocities on screen but outside of that the film really is boring. I finished the film and pretty much dismissed it as an art film of the most pretentious sort. Then something happened, I started to revisit the film now and again, and eventually picked up the Criterion edition. It’s not that I particularly like the film, rather the film makes me to think and ponder things. I’m engaged with the film on more than the visceral or emotional level, it’s a film that gets my mind going. I’ll come across something and it will trigger something that will make me want to take another run by the film.

The film is not for all audiences, or even the majority of audiences, but for those who can handle dark graphic places and don’t mind pretentious art films mixed with Grand Guigol blood and poo I think you might want to give the film a go. I have no idea what you’ll think, however many years on I’m still trying to figure out what I think, but its worth a shot.
Posted by Steve Kopian at May 24, 2013