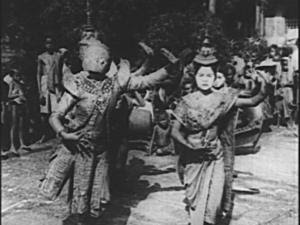 The Forgotten Horrors 2 entry for this film talks about how producer Dwain Esper submitting this film to the censorship board and being advised to make cuts. He made the cuts requested and got the seal of approval he wanted…only to send out the unedited version out for release. You have to love the man’s balls, if not his schlocky exploitation movies.

The premise of the film is to reenact a screening of footage for the Los Angeles Explorers Club of footage shot in 1912 of a trip into Cambodia to Angkor by a pair of now deceased explorers. The producers freely admit that they reconstructed some sequences in the studio based upon the diaries of the explorers to act as linking material for the actual footage. I’m sure this is what accounts for the seemingly endless shots of the topless women carrying equipment through the jungle.

Uneven but interesting mix of documentary and silliness about life in the jungles of South East Asia, is worth seeing for how far off lands used to be seen and for a peak at the time capsule view of a world long gone.

The narration and the genuine documentary footage are compelling. Its clear that what we are seeing is a world that no longer exists. The coming of civilization and wars having wiped out much of his forever. This real life stuff is amazing and the reason to see it.

The made up stuff showing the bearers and the stand in explorers stuff grows tiring. There is only so much “censoring” that I can stand (dark shadow branches are over everything) and it becomes more annoying than anything.

And yet the films unique sights make this worth seeing…